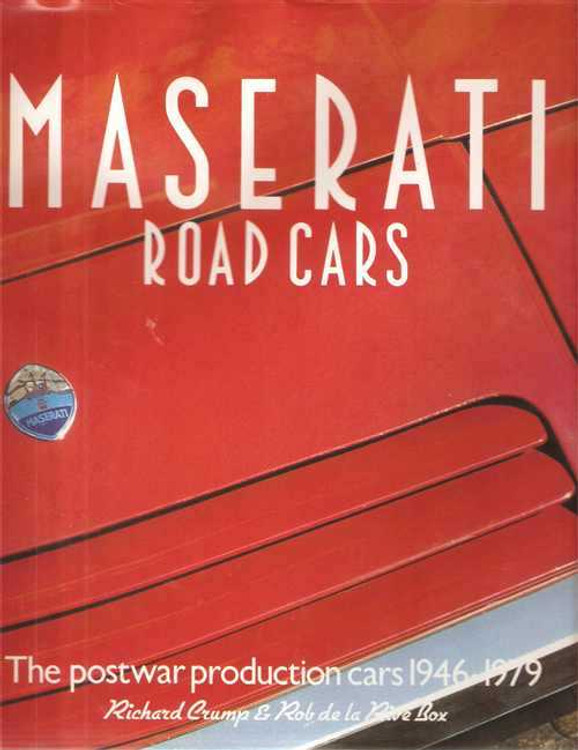 The Maserati is very underexposed. Perhaps with good reason? Books on the subject are few and far between, both in number and quality. Yet the cars are constantly on the lips of the Italian 'exoticar' enthusiast, in the same breath as Ferrari and Lamborghini. Maserati is surrounded by a blockade of myth, untruth and inconsistency ready to catch the unwary researcher and enthusiast. After four company owners, numerous financial peaks and troughs, little interconnection between the road and racing cars, and over thirty years of historical neglect, little real information appears to be left and what is left is extremely hard to unfathom. When Richard Crump and Rob Box started out on this project, even with their extensive personal experience, they realized that they were in for a hard time. Their offering is nothing short of miraculous.

For the first time, MASERATI ROAD CARS sorts out the company's production cars into an accurate assembly, giving their specifications directly from company brochures and build sheets, their production figures from company orders and invoices, and their development from company archives, interviews, car handbooks, photographs and an analysis of previously suspect material. Here we show close to 500. illustrations, some in colour, of these charismatic cars, of which less than 10,000 have been built (in total) through some sixteen model series. Undeniably, this is an appreciation of the cars, yet does not suffer a lack of comment.

MSRP:
Now: $89.95
Was:
By: Price Williams . John Price Williams tells the story of the Biturbo and all the cars based upon it, including the Spyder, Karif, Shamal and Ghibli. MASERATI is one of the great names of the...

MSRP:
Now: $89.95
Was:
By: Martin Buckley . Description In the world of Italian glamour, the name Maserati goes back much further than either of its rivals from the land of the supercar, Ferrari and Lamborghini, yet it...

MSRP:
Now: $59.95
Was:
By: Brooklands Books . Maseratis are true luxury cars that will always remain exclusive because of their very nature and that is the way it should be. Include are road and comparison tests, new...

MSRP:
Now: $49.95
Was:
By: Brooklands Books . This book covers the period when Maserati secured its future by strategic liaisons first with Chrysler in the USA and then with Fiat in Italy. In 1982 the Biturbo was...

MSRP:
Now: $295.00
Was:
by Marc Sonnery, ISBN 9780957397804 The least documented era of Maserati s history, the Citroën period of ownership, is also the most misunderstood. Thanks to unprecedented access to...

Maserati - The Evolution of Style

MSRP:
Now: $49.95
Was:
By: Brooklands Books . The Citroen Company influenced the Maserati models and a new engine was developed for the Citroen SM. However, by 1975 the plan was to put Maserati into liquidation...

MSRP:
Now: $89.95
Was:
By: Price Williams . John Price Williams tells the story of the Biturbo and all the cars based upon it, including the Spyder, Karif, Shamal and Ghibli. MASERATI is one of the great names of the...

MSRP:
Now: $49.95
Was:
By: Brooklands Books . In the year that Maserati won the Formula 1 World Championship they began to focus on low-volume production of high-performance road cars. All the early cars had the 3.5L...