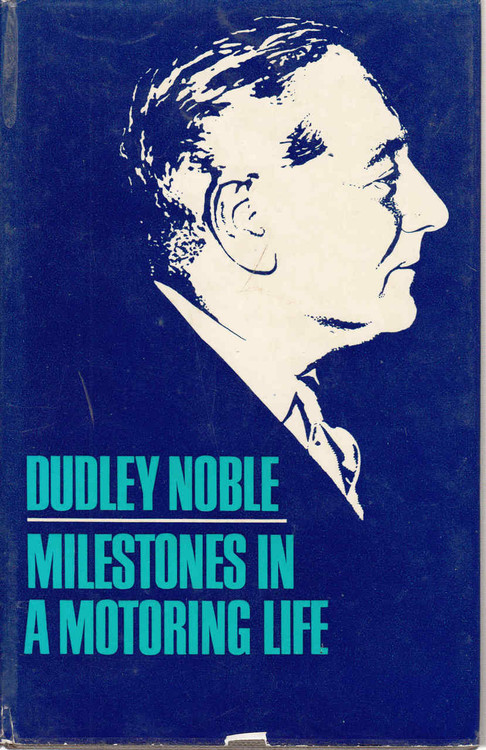 Of books about old cars there has been a spate, but this is something entirely different. The author as a young man was 'mad' on motors and got himself a job with the Rover Company at Coventry in 1911.

He started off as a tester, was pressed into service as a trials driver (the word 'rally' not then being used), competed in the Paris-Nice of 1912—more or less the forerunner of the Monte'— and by his ubiquity in all the numerous events of the day acquired the nickname of 'Rover Noble'.

At this period the motor trade was in process of becoming the motor industry, and an output of 50 cars a week was considered big. It was the 1914-18 war, in which the author was an M.T. workshops officer, that fostered the vast growth of the motor industry.

The author recalls the process whereby the British public was made to realise that the motor vehicle was becoming a reliable means of transport. Much of his life has been spent in driving home this fact by demonstrations, well attended by publicity, on the roads of mcst countries in the world.

Half a century ago the motorist who took his car abroad was considered more than a bit of a dare-devil, and Dudley Noble thinks (with some foundation in fact) that he has helped to make the joys of foreign touring more accessible to motorists as a whole. His book will have a decided fascination for all who would like to read a first-hand account of how the 'old banger' gradually developed into the svelte automobile of today.

MSRP:
Now: $40.00
Was:
SUCH questions are not easy to answer, but Keith Ray has embraced the challenge and compiled a myth-busting book packed with fascinating facts. Ranging from the firsts in motoring technology such...

MSRP:
Now: $295.00
Was:
By: Tony Bailey, Paul Skilleter . Mike Hawthorn was horn in 1929 in a small south Yorkshire town, the son of an engineer whose passion happened to he motorcycles and motor sport. The family moved...

MSRP:
Now: $43.95
Was:
Author: Pat Ware, ISBN: 9780857330802 An insight into the history, development, production and roles of the British Army's light four-wheel-drive vehicle. Designed as a dual-purpose agricultural...