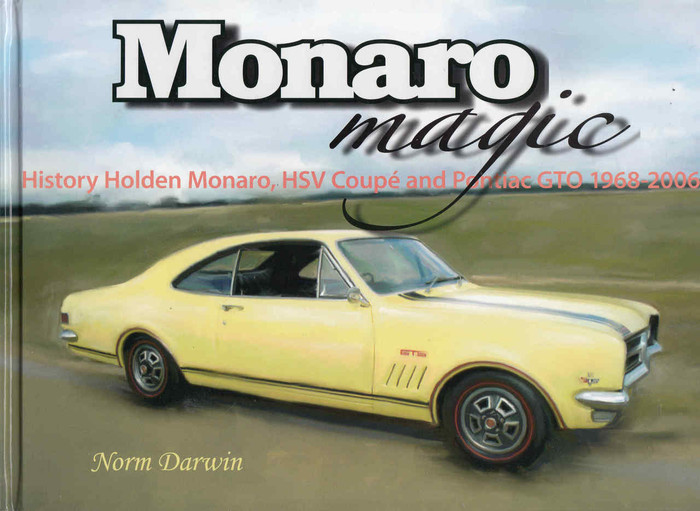 There are few car model names that can claim iconic status. In Australia it comes down to about four. Falcon GT, Charger, Torana XU-1 and Monaro. It was no nostalgic moment that Holden made the decision to name the new coupe in 2000 "Monaro". The decision was designed to capture that moment in the market's mind when the Monaro was in it's heyday. The fact that Monaro lost it's original design parameters after 1971, become 'soft', perhaps even stodgy and ended up a sedan, counted for nothing. When the new coupe arrived it came with an expectation. It wasn't a ballsey muscle car like the first Monaro GTS 327, but a modern performance coupe. As a reformed boy racer I would have liked to have mern more bolder, unique colours but would be happy for any of the later coupes to sit in my garage, particularly the Coupe 4, which I believe was the pinnacle of the coupe's development, it would have to be Sting Red though.

My first, and only Monaro to date came when the '59 Chev I was driving expired. Heather and I both worked at Holden and we noted a number of HG Monaros were being sold from the fleet. Standing in the dusty holding yard, a Yellow Dolly 253 manual stood out and at $2,175 and 4,120 ks on the clock was ours.
We owned the car until 1976 and by the time it was sold it had been somewhat modified. Spoilers, mags, custom paint, flares and HQ door handles. Researching this book has brought back a lot of memories. The unmistakable feel, noise and ride of the mid-70s coupes, the cable clutch, clunk of the door' but best of all the note of a dual exhaust and scream of a Qjet with the secondaries open. I can forget the oversteer.

The first series (HK-HG) Monaro coupe sold 36,221 coupes and the second (HQ-HX) 15,395, spanning 10 years. The third series, over five years saw 57,723 coupes produced. For a specialist model this was an outstanding result not only in the domestic market but also overseas. Monaro
is now put Australian design firmly on the world automotive stage and has undoubtedly led to the company surviving the recent world financial crisis.

Norm Darwin commenced writing in 1968, working freelance for a number of motoring magazines. In 1969 he started work with GM-Hoidens in the Engineering Department. After 15 years with Holden, Norm moved to Daylesford to run a small business in partnership with his wife Heather. In 1983 his first book, "The History of Holden Since 1917" was published. This history became the enthusiasts guide to makes and models made by GMA and GMH between 1917 and 1983. Now out of print the book commands an excellent used price.

A second book, The History of Ford in Australia, was nominated for the annual Cugeut Award, the first Australian publication to be so nominated by the Automotive Historians Society. 100 years of GM in Australia was published in January 2002 and covered GM operations in Australia from 1902. Now out of print this book sold 5,000 copies.

Torana Tough was published in February 2012 in the same manner as Monaro Magic, high content values and printing standards.

Celebrating 50 Years of the Monaro DVD

MSRP:
Now: $39.95
Was:
Duration:Approximately 2 Hours and 40 minutes The release of the all-new HK Holden Monaro in 1968 sent a shockwave through the Australian motor industry. Holden’s reputation for building...

MSRP:
Now: $10.80
Was:
JUST HOLDENS Issue 33 - A TRIBUTE TO MONAROA special SOUVENIR MAGAZINE to mark the 50th ANNIVERSARY of the mighty MONARO. Over the decades Monaro has become part of our national psyche and a genuine...

MSRP:
Now: $149.95
Was:
By: Ewan Kennedy . Compiled by motoring historian Ewan Kennedy Holden Monaro 1968-2004 tells the ongoing story of the magnificent Monaro, one of the most fascinating cars in the history of automotive...

Monaro Concepts - From Concept to Reality

MSRP:
Now: $44.95
Was:
Author: Eric Norton, from the Publishers of Just Holdens Magazine, ISBN: 9780980572315 **SIGNED BY AUTHOR** Amazing photographic history of how Australia’s greatest muscle car was born The...

MSRP:
Now: $149.95
Was:
By: Ewan Kennedy . Compiled by motoring historian Ewan Kennedy Holden Monaro 1968-2004 tells the ongoing story of the magnificent Monaro, one of the most fascinating cars in the history of automotive...

Monaro - Rebirth Of A Legend (Signed by Author Joshua Dowling)