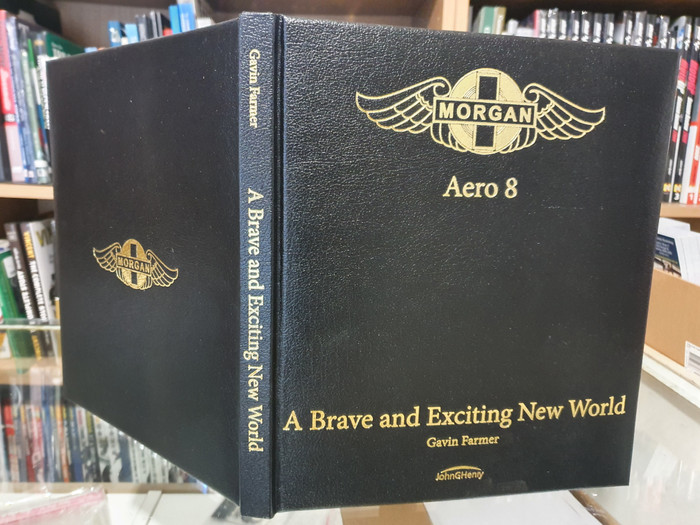 When Charles Morgan unveiled the Aero 8 at the Geneva Motor Show he could not possibly have envisaged what an impact this stunning new Morgan sports car would have on the world.

It was a true supercar with staggering levels of performance.

The new book MORGAN AERO 8: A Brave and Exciting New World, written by Gavin Farmer, explores in some detail the events that led from concept through to reality. It is a most interesting and fascinating story that surely will become a sought-after reference for all Morgan enthusiasts.

Morgan is the world's only family-owned automobile manufacturer, one that has recently celebrated its Centenary. Quite amazing.

With the arrival of the Aero 8 the company stepped boldly into the new Millennium with a genuine high performance supercar capable of a top speed of around 170mph (270km/h) and able to accelerate from 0-60mph (96km/h) in less than 5.0 seconds! Under that sleek body was a hi-tech aluminium intensive chassis and a powerful BMW V8 engine.

Morgan Aero 8: A Brave and Exciting New World is a 223-page book that explores in quite some detail the design and development of the Aero 8 and its several derivatives. It is printed on glossy art paper with hard binding and a colour dust jacket. Included are hundreds of photographs, many of which have never been previously published.

Charles Morgan has written the Foreword.

Gavin Farmer has established himself as a writer of international repute with major articles in magazines such as Automobile Quarterly and Collectible Automobiles. In addition he has a growing portfolio of self-published automotive titles such as BMW Coupes: Legendary Performance, Style Leaders; Holden Monaro: It's a Legend; Great Ideas in Motion: A History of Chrysler in Australia; Hey Charger; and Leyland P76: Anything but Average.

Morgan Aero 8 - A Brave and Exciting New World! (signed by the author)

MSRP:
Now: $39.95
Was:
The Official Bathurst Top Ten argument settler… You’ll never get who sat on pole wrong! The traditional Shootout at Bathurst has become a pre-race highlight of each year’s...