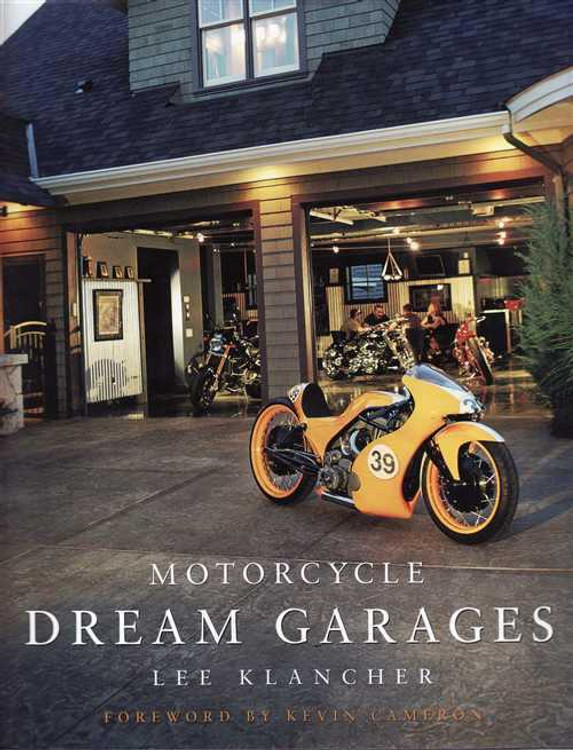 The keepers of motorcycle spaces have stories to tell. To create Motorcycle Dream Garages, author Lee Klancher traveled across North America to give readers an inside look at the homes of some legendary motorcycles and their well-known collectors. Many of these spaces have never been photographed for publication before, and a few are secret havens that would only allow access on the condition that the owners' identities be kept secret.

These anonymous hideouts include a large space in Southern California that houses a collection of exotic high-performance motorcycles, as well as a New York warehouse that is shared by an eclectic group of 10 motorcycle collectors and builders. The less-secretive garages encompass many great motorcycling stories, including Rising Wolf Garage, which housed the famous FDNY Dream Bike—the C13750 that was bought by a firefighter who was later killed in the September 11, 2001, World Trade Center attacks.

Klancher also focuses his lens on the space where Chris Cosentino designed and built an innovative race chassis and later built a complete motorcycle for Moto2 competition in the FIM Grand Prix series. Other profiles include the garage of Hollywood stunt motorcycle rider and race champion John Hateley, the dining room that is home to the world's most valuable motorcycle, and an $8 million place in the hometown of builder Roger Goldammer.

MSRP:
Now: $59.99
Was:
Published by Motorbooks, authored by Lee Klancher, ISBN 9780760344224, Flexi-bound 2nd Edition Flexibound edition of the book Motorcycle Dream Garages explores homes of some of the world's greatest...

MSRP:
Now: $99.99
Was:
By: Kris Palmer . A garage is a special place—not home, not office, not rec room. It may combine elements of all of these reference points, yet it remains unique. Dreams are born, housed,...

MSRP:
Now: $59.99
Was:
Published by Motorbooks, authored by Lee Klancher, ISBN 9780760344224, Flexi-bound 2nd Edition Flexibound edition of the book Motorcycle Dream Garages explores homes of some of the world's greatest...

MSRP:
Now: $59.95
Was: $69.95
By: Tony Tranter . Tony Tranter is an acknowledged expert on motorcycle electrical systems, having pioneered the training of motorcycle mechanics to City and Guilds standard. His book is now in its...

MSRP:
Now: $59.99
Was:
By: Tracy Martin . 1st Edition, 2007 A motorcycle's electrical system can be daunting to even the most adept home mechanic. And yet, the more complex these systems become--and the more important to...

MSRP:
Now: $59.95
Was:
By: Keith Weighill . Description Servicing and minor repairs for all motorcycles and scooters. Aimed at the DIY mechanic and students embarking on courses in motorcycle engineering Service tasks are...

MSRP:
Now: $59.95
Was:
By: David H. Jacobs . The Secrets for Making Any Bike Look Its Best And you thought you knew how to clean your bike. Think again! David H. Jacobs Jr. will teach you things you didn't even know...

Motorcycle Touring - Everything You Need To Know

MSRP:
Now: $59.95
Was:
By: Dr. Gregory W. Frazier . The popularity of motorcycle tour riding is increasing steadily, but riders taking off on extended trips must realize there are unique hazards they can face when riding...