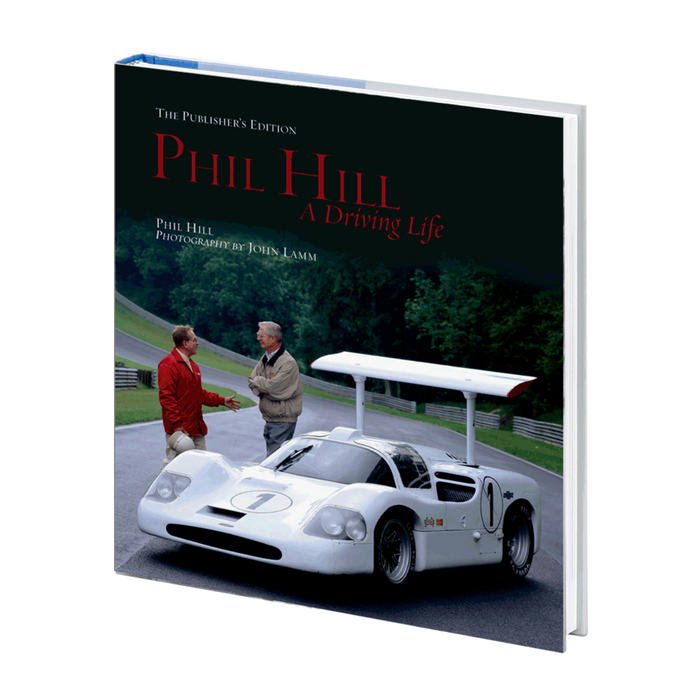 Though he’s best remembered as the first American Formula One champion and a three-time Le Mans winner, Phil Hill (1927-2008) also enjoyed a long career as an automotive writer. Hill was a regular contributor to Road & Track magazine, writing vivid, first-person accounts of his experiences driving everything from the earliest horseless carriages to the most modern road and race cars. Phil Hill: A Driving Life gathers the best of these stories, each of them accompanied by dazzling photographs from Hill’s friend and colleague John Lamm.

The book starts with the very first car, a three-wheeler built by Karl Benz in 1886. From there it’s on to a classic Packard touring car from 1915, the first-ever MG, the revolutionary rear-engined Auto-Union D-Type, and many others. Several chapters find Hill reunited with cars that played a significant role in his racing career. From the 1950s there’s the Jaguar XK120 that gave him an early win at Pebble Beach in 1950 and the Maserati 250F that he drove in his first Grand Prix at Reims in 1958. A decade later there are the Ford GT40s he helped develop, 1963’s ill-fated ATS 100 Grand Prix car, and the unique, high-winged Chaparral 2F that yielded his last professional victory at Brands Hatch in 1967. And there are also Phil’s recollections of other great drivers he drove with and against, including Juan Manuel Fangio, Stirling Moss, Olivier Gendebien, and Dan Gurney.

Whether he’s writing about a rare vintage race car, a hard-fought victory, or an old friend, Phil’s essential qualities of intelligence, curiosity, and integrity always come through. Phil Hill: A Driving Life provides a unique perspective on automotive history from a true champion.

The Table of Contents below lists the cars and drivers featured in the book.