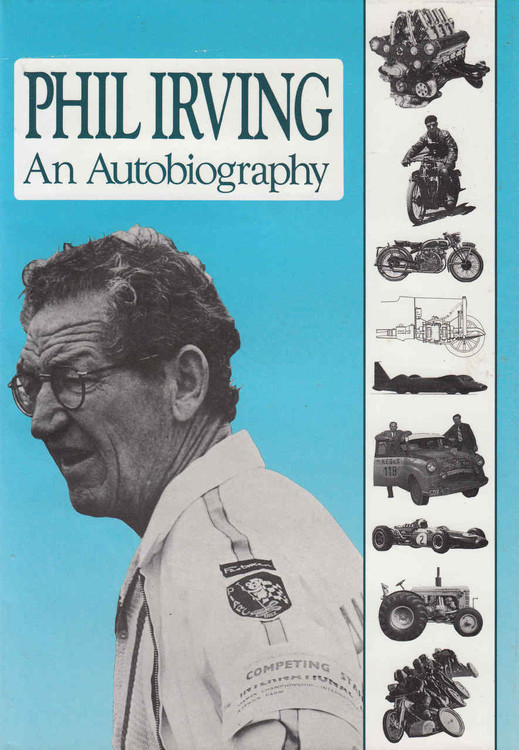 In the history of automotive engineering, one Australian holds a unique place.

He is Philip Edward Irving, M.B.E.. whose 60-year international career included the creation of landmark designs for both motorcycles and cars.

Phil Irving's keen eye for detail and his quiet — if irreverent — sense of humour, were combined with the ability to explain technical matters with simple clarity.

This led him into a parallel career as a widely-respected technical author and journalist, and now has given us a broad-canvas autobiography which goes far beyond the dry world of the drawing board.

This is the story of a boy who drove horse teams in rural Victoria and went on to draw Jack Brabham's Formula One racing engine; the story of a youthful champion from Australia's dusty motorcycle tracks who rode pillion to England and designed one of the truly great motorcycles: who designed tiny engines for WW2 emergency lifeboats and for giant tractors in Australia's outback.

Irving's flair for design became his ticket to the world. In return he gave the world machines which, in their practicality, simplicity and ingenuity, were typically Australian.

MSRP:
Now: $49.95
Was:
By: Chris Walker . Chris Walker is Britain's most popular current motorcycle racer, having captured the hearts and minds of the motorcycling fraternity with a never-say-die attitude, incredible...

MSRP:
Now: $79.95
Was:
By: John Reynolds . John Reynolds first slung his leg over a bike when he was just ten months old. It was a small home-made trike and he started riding this long before he could walk. Little did his...

MSRP:
Now: $55.00
Was:
The information in this unique publication has been meticulously researched by Stephen Stathis, Mark Griffin and Peter Schell. All three Phillip Island races are covered as are all of the Bathurst...