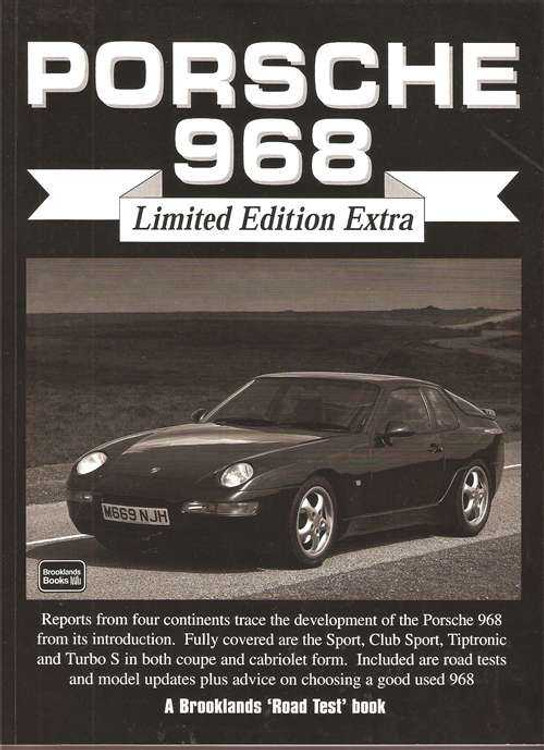 The Porsche 968 was introduced to replace the 944. It came with only one engine option, two body styles (coupe and cabriolet), and manual or tiptronic transmission. Coming in as the cheapest Porsche to rival the Renault Alpine and Audi S2 it still had a superbly balanced chassis. The Club Sport was introduced to bring Porsche ownership to a wider market. Several items were deleted, notably the rear seats, and decals on the side distinguish it from its more expensive brother. It was also lighter which banished the excess body roll and the oversteer was controllable.

With falling sales in 1993 a short run Turbo S was produced with a rear wing, bonnet scoops and front spoiler. 0-60 was under 5 seconds, the 3-litre engine produced 305bhp and had a 6-speed manual gearbox. The 968 Sport slotted between the CS and standard 968, a little less basic than the CS. These cars helped pull Porsche from the doldrums.

This is a book of contemporary road and comparison tests, specification and technical data, new model introductions, driver's reports, buying used and history.

MSRP:
Now: $49.95
Was:
By: Brooklands Books . The story of the iconic front-wheel-drive Citroens as driven by Maigret! Included are road tests, detailed performance data, plus new model reports together with advice on...

MSRP:
Now: $69.95
Was:
By: Brooklands Books . Road tests, model introductions, driving impressions, performance data, specifications plus long-term reports trace the progress of the Boxster from its introduction in 1996...

MSRP:
Now: $49.95
Was:
By: Adrian Streather . Description This book provides a comprehensive list of all build specification codes used by Porsche AG for the Porsche 911 series cars, from model years 1989 to 2005. VIN,...

MSRP:
Now: $29.95
Was:
STOP! Don't buy a Porsche 986 Boxster without buying this book FIRST! Having this book in your pocket is just like having a real marque expert by your side. Benefit from Adrian...

MSRP:
Now: $166.50
Was:
By: Adrian Streather . Here is THE Essential Companion to every aspect of the Porsche 993, the King of Porsche. Whether you are an owner or a would-be owner, this book is packed with vital...

MSRP:
Now: $29.95
Was:
STOP! Don't buy a Porsche 987 Boxster or Cayman without buying this book FIRST!  Having this book in your pocket is just like having a real marque expert by your side...

MSRP:
Now: $299.95
Was:
The Porsche 956 and its derivative, the 962, have gone down in history as the most successful prototype sports racers ever, winning numerous races and championship titles during the 1980s and even...