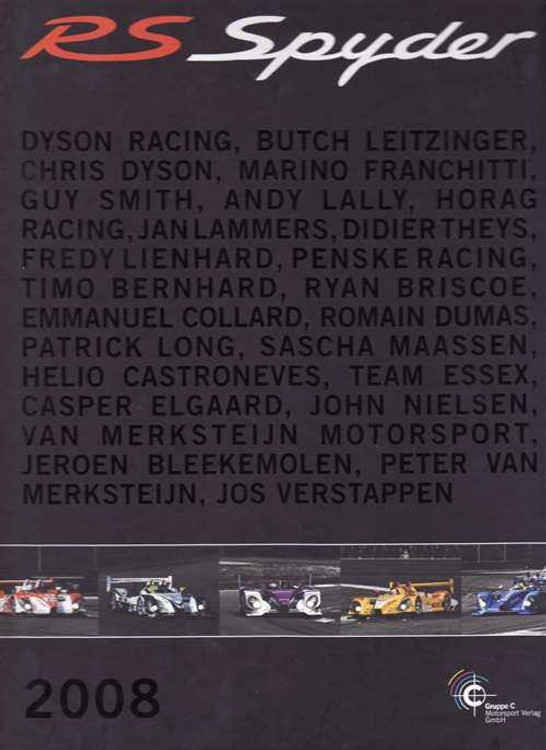 In 2008 eight RS Spyders were racing all over the world. After the opening round of the American Le Mans Series, teams and fans could look forward to a great season because the RS Spyders already scored a historic 1-2 in the Sebring 12 Hours, even beating the more powerful prototypes from the LMP1 category. This year, three of Porsche's sports cars could also demonstrate their strength in the European-based Le Mans Series for the first time. They completed the season with great achievements. Two teams even took up the challenge of competing in the Le Mans 24 Hours in front of more than 260,000 spectators and they scored a 1-2 in the LMP2 class right away. All drivers' and team championship titles and the manufacturers' titles were won in 2008.

On the first pages, readers learn about the development work carried out in Weissach and the impressive technology of the sports car. Improvements already became apparent in the first test sessions at Sebring. The presentation of the five teams and 20 drivers helps to be well informed for the first rounds of the 2008 ALMS already. A world map indicates the locations of the teams and the tracks where the RS Spyder raced in 2008. Modem design and a high-quality finish round off this unique season review.

MSRP:
Now: $189.95
Was:
By: Tim Upietz, Ulrich Upietz . Over 248 pages with more than a thousand colour photographs, "Porsche Sport" 2008 tells the history and the stories behind the headlines of the RS Spyder's triumphant...

MSRP:
Now: $59.95
Was:
By: Porsche Museum . Description Smart design solutions, pioneering technology and classic vehicles all come together at the new Porsche Museum at Stuttgart-Zuffenhausen. Housed at Porsche's...

MSRP:
Now: $195.00
Was:
By: Clauspeter Becker, Stefan Warter . - Seccond-Hand book in excellent order ! "It all started when I looked around and couldn't find the car of my dreams anywhere. So I decided to build it myself!"...