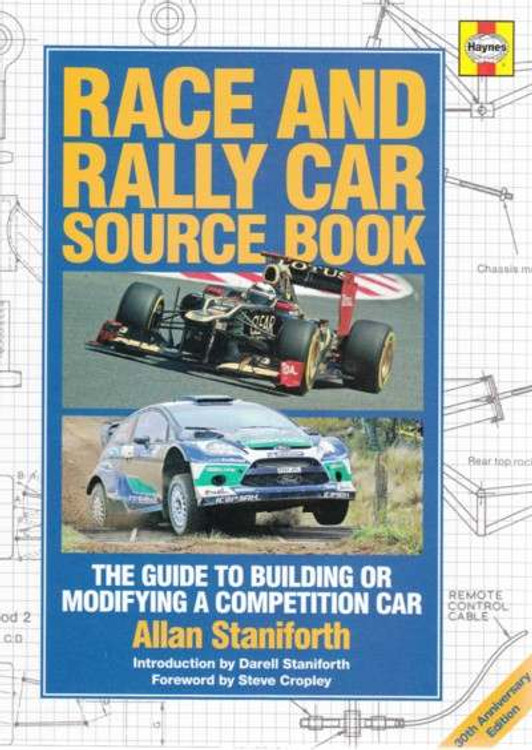 Topics covered by this unique book  (30th anniversary edition) include:

It's 30 years since the original edition of Race and Rally Car Source Book was published, and in that time there have been massive developments in electronics - engine management systems, computers and data logging, as well as electronically controlled gear-shifting systems, paddle-shift, autoblip, etc. But the backbone of this book is still equally valid today as it was when first published, as the theory behind suspension angles, corner weights, wheel alignment, damper settings/ lengths, roll bars and springs, is much the same now as it was back then, and those factors form the cornerstone of what makes a competitive competition car that handles and corners well.

I know from my own experience of modern saloon cars that the production suspension systems are so well designed that it is hard to make big improvements (in fact it's possible to make them much worse!), so it then comes down to optimising spring rates/ damper settings, bushings, camber angles and tyres. The information contained in this book can be applied to any type of competition car, whether it be a rally, rallycross, race, hillclimb or sprint car.

My father competed himself continually for almost six decades, initially in circuit races, and then sprints and hillclimbs. He competed in a series of home-built specials; various BMC saloons, through the Terrapins and the Gould Terrapin (written off in a crash at a Wallasey sprint in 1987, which was followed by an enforced period of hospitalisation), then Van Diemen and Quest-chassied 1600cc single-seaters, to finally the Megapin - a bike-engined joint venture with Carlisle special builder Ian Scott. It was in this car - painted a lurid shade of green - that he competed up until his last meeting at his local Harewood track (where he had only missed a handful of events in almost 50 years) in 2009, when he was approaching his 84th birthday. Sadly, he passed away a little over a month later following a short illness.

Throughout his time involved in motorsport he was always willing to give advice to others, including fellow competitors, and nowhere was this more prevalent than during his many stints as a judge of the Formula Student series of competitions in the UK as well as in the USA. Australia and Germany. He would attend these competitions,  sometimes for weeks at a time, on an expenses-only basis, as he saw them as a breeding ground for the next generation of car designers and builders, in a similar vein to his own philosophy.

Well into his eighties, he was still doing set-up work and suspension analysis on a whole host of vehicles - modern, historic, saloon, single-seaters and sports cars used in a variety of disciplines, including sprints, hillclimbs, races and road.

Whilst I would never claim to be as knowledgeable as he was about suspension matters, some of it must have rubbed off after all those years, and nowadays I can still apply all those basic principles of spring rates, dampers, alignment, suspension frequency, roll bars etc, to current competition cars in use today. The only problem now is I can't ask him any questions if I encounter a problem not covered in this book!

MSRP:
Now: $66.95
Was:
By: Jay Storer . Haynes - publishers of the best automotive manuals for repairing your vehicle - now offers the same easy-to-follow, step-by-step process for customizing your ride. Everything from...

MSRP:
Now: $66.95
Was:
By: Haynes . Haynes - publishers of the best automotive manuals for repairing your vehicle - now offers the same easy-to-follow, step-by-step process for customizing your ride. Everything from wild...

MSRP:
Now: $75.00
Was:
By: Doug McCleary . The Car Builder's Handbook - Tips and Techniques For Builders of Kit Cars and Street Rods. Building a kit car or street rod from the ground up requires knowledge and skill in...

MSRP:
Now: $49.50
Was:
By: Forbes Aird . Description Most racing engineers will agree that the key to a winning race car begins with the chassis. In this comprehensive revised and updated book, award-winning writer Forbes...

MSRP:
Now: $39.95
Was:
By: Steve Rendle . Description After the closest-fought Fl season for many years, Sebastian Vettel was crowned as the youngest-ever World Champion at the thrilling 2010 season finale in Abu Dhabi...

MSRP:
Now: $69.95
Was:
By: Joseph Katz . Race Car Aerodynamics Designing for Speed - The book combines clear explanations, illustrations and photos to help the enthusiast understand a complex subject, with invaluable...

MSRP:
Now: $59.95
Was:
By: Larry Davis . In many ways, drag racing spawned the muscle car era of the ‘60s. Super Stock drag racing was huge in the early ‘60s, and the factories encouraged their teams’...

MSRP:
Now: $449.95
Was:
This color Bentley Manual is a comprehensive source of service information and specifications for Porsche 911 (Type 996) Coupe, Targa and Convertible models from 1999 to 2005. The aim throughout this...