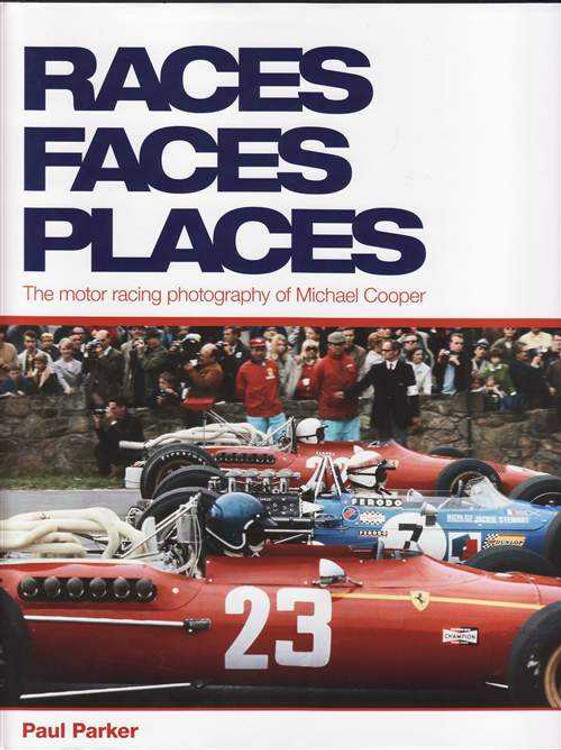 Any driver, team manager, mechanic, marshal or spectator at Grands Prix, sports car races and other major motor racing events in Britain and Europe will have seen Michael Cooper's busy figure recording the scene for posterity during the 1960s and '70s. Now, several decades later, this magnificent book collects together his best work to present all the action and atmosphere of the races, the faces and the places.

A notable feature of Cooper's work — and a particularly appealing aspect of this book — was his eye for the more esoteric and unusual images. The way he could spot opportunities that other photographers missed, combined with his sometimes unorthodox style, made him stand out from his more traditional contemporaries. He was as interested in the individuals and the backdrops as he was in the actual racing.

So it is that we have period pictures of Goodwood's car park on a sunny day, his friends en route to some event or other, a romantic image of his beloved Sunbeam Tiger in Spanish mountains, and shots taken during the making of the films Grand Prix, Chitty Chitty Bang Bang and Le Mans. We see some of the less familiar racing faces along with the well-known ones, often in 'off-duty' situations where he was able to join the best drivers of the day because he was liked and accepted by them.

He was also a classic motor racing photographer who stood just a few feet from the action with a short-focal-length lens on his camera, and his skill in this respect is amply displayed in these pages. As the years passed, however, the opportunities for thiskind of close-up work — and, indeed, access to the drivers themselves — were gradually reduced by safety considerations, and he was much dismayed by the way his freedom as a photographer was eroded.

This fine collection of photographs, nearly 400 of them in both colour and black and white, is accompanied by insightful commentary from Paul Parker, who specialises in photographic books about motor racing, as exemplified by his four 'In Camera' titles covering sports car racing and Formula 1 in the 1960s and '70s, all published by Haynes.

The Ultimate Excitement - The Motor Race Photography of Nigel Snowdon

Continental Circus - The Races and the Places, the People and the Faces

MSRP: NZD138.92
Now: NZD85.49
Was: NZD138.92
By: Hartmut Lehbrink . To write an encyclopedia of Mercedes racing drivers is, in essence, to compile a who’s who of the four-wheeled sport. No wonder when, from the very beginning of motor...

MSRP:
Now: NZD85.49
Was:
Published by Motorbooks, authored by Paul Thede and Lee Parks, ISBN 9780760331408 Based on the wildly popular Race Tech Suspension Seminars taught by Paul Thede around the world, this step-by-step...