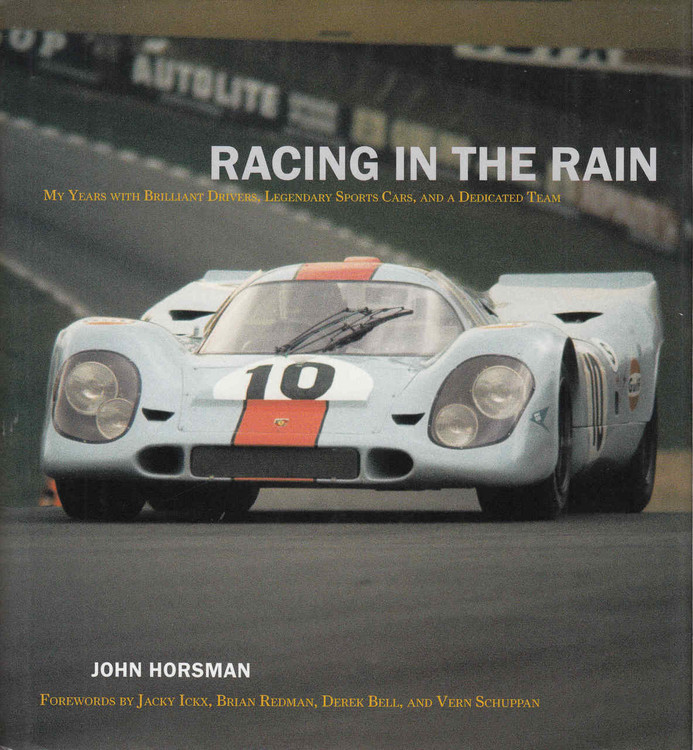 What was it like to lead a top team in the ultra-competitive 196os and 1970s?

You will learn firsthand as John Horsman describes in vivid detail the technical know-how, interpersonal management skills, and unwavering commitment it took to guide a winning combination of drivers and crewmen.
Horsman began his career at Aston Martin, where he was hired by the legendary John Wyer and worked on road cars as well as race cars, including the beautiful DP214 prototypes.

After Wyer moved to Ford Advanced Vehicles, he invited Horsman to join him in building and preparing the legendary GT40s.

When Ford's contract ended, the team carried on as J. W. Automotive Engineering, and such was their success with the GT4os and their evolutionary GT40-based Mirage that Porsche hired them to become the official factory team. In a defining moment, Horsman identified the cause of the Porsche 917's fearsome handling, and solved the problem of its aerodynamic instability with a tail that the factory quickly adopted—so immediately and completely that one scarcely remembers what the 917's original tail looked like.

For all of the team's many successes, it also experienced its share of failures and disappointments. It is a measure of the man that Horsman unflinchingly recounts these moments, analyzing mechanical failures and recalling mistakes in strategy or preparation, including his bitter disappointment at Le Mans in 1982 when his car was disqualified on a technicality and Mario Andretti pulled from the driver's seat by officials.

This was a golden era of sports-car racing, and Horsman's account of it is exciting, candid, and often humorous, capturing the period through the experiences and contributions of individual crew members as well as superstar drivers.

The technology during this time evolved at a furious pace, and mastering it took a delicate combination of scientific evaluation, intuition, and good luck. Horsman's racing notes—astonishing in their detail—take the reader into the cars with the drivers, and into the Gulf-Wyer pits, as the winning strategies are developed.

John Horsman graduated with honors from Cambridge University in 1958, with a master's degree in mechanical sciences (engineering). After serving in the Royal Air Force, Horsman apprenticed with David Brown, and proceeded to Aston Martin as a project engineer. He became an assistant to the managing director, John Wyer, in 1961.

In 1964 Hors-man followed Wyer to Ford Advanced Vehicles Ltd., where he was responsible for the GT40 program. J. W. Automotive Engineering was created after the Ford program ended, and Horsman became director of the company and chief engineer. He went on to manage the Gulf Racing Research Company, which was an outgrowth of JWAE, and later moved to America to run the Mirage program for Grand Touring Cars in Phoenix, Arizona.

He now lives in Tucson, Arizona, with his wife, Janet.

Gilles Villeneuve - The Life of the Legendary Racing Driver

MSRP:
Now: $95.00
Was:
By: Gerald Donaldson . Gilles Villeneuve became a legend in his own time, a driver whose skill and daring personified the ideals of Grand Prix racing, the pinnacle of motor sport. With his...

MSRP:
Now: $149.95
Was:
When the Ford Motor Company needed a new car aimed at the youth market of the 1960s, it created the instantly-popular Mustang. When it decided to turn the Mustang into a true sports car it...

MSRP:
Now: $89.99
Was:
By: Giancarlo Reggiani . This book is a celebration of Lancia's 50 glorious years of motor racing history and the cars that created it, including the D 50, the only Formula One car the company ever...