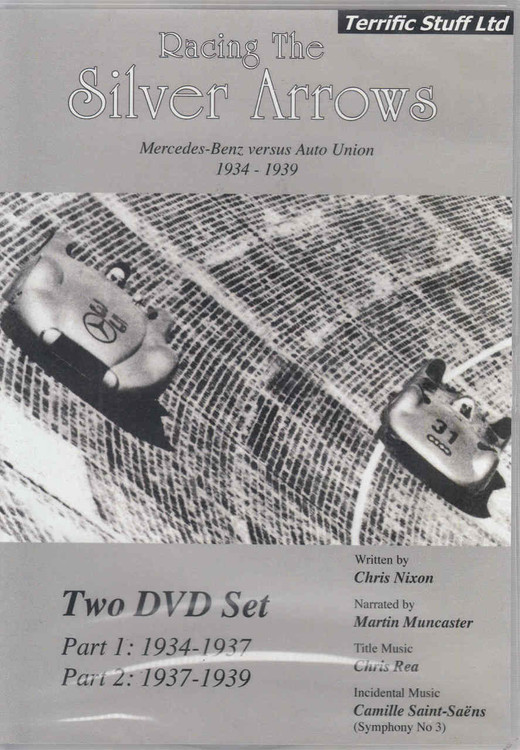 Racing The Silver Arrows tells the full, remarkable story of how t newly formed company of Auto Union challenged the old establishe firm of Mercedes-Benz on the race tracks of the world from 1934 to 1939. '105 minutes of original film with glorious archive footage!

The first DVD of this two part set opens in 1934 with the design and building of Prof. Porsche's mid-engined Auto Union. This was Hans Stuck's year. In 1935 Auto Union sign up Bernd Rosemeyer but Rudolf Caracciola becomes the first European Champion with Mercedes-Benz.

1937 Mercedes-Benz win in Tripoli with their new W125. Rosemeyer tests the high speed banking at Avus but Hermann Lang wins the race at an average speed of 162mph. Rosemeyer wins Eifel GP and then breaks numerous speed records on the autobahn. Rosemeyer wins The Vanderbilt Cup in America. Back at Spa Auto Union are 1st and 2nd; Caracciola wins the Gerrnnn GP but sadly Ernst von Delius is killed; Stuck wins the Mountain Championship at Freiburg.

The second DVD continues the 1937 season with Manfred von Brauchitsch winning at Monaco: Rosemeyer wins both the Coppa Acerbo and Donington. Caracciola regains the Championship but Rosemeyer and Auto Union then dominate the 'Rekord Woche'.

1938 sees a national tragedy when, Rosemeyer dies during another record attempt. A new 3-litre Formula is introduced and Dick Seaman wins the German GP: Stuck is again Mountain Champion after winning at Grossglockner. Tazio Nuvolari wins at Monza and Donington but again Caracciola is Champion.

Then, on the day war is declared. Nuvolari and Auto Union win in Belgrade. This was the final GP of all for these Silver Arrows

The Story of Mercedes - Benz DVD

MSRP:
Now: $295.00
Was:
By: Koto Bolofo . The Goodwood Revival relives the glory days of the legendary Goodwood Motor Circuit, Britain?s leading racing venue between 1948 and 1966. Nowadays, the Revival hosts contemporary...