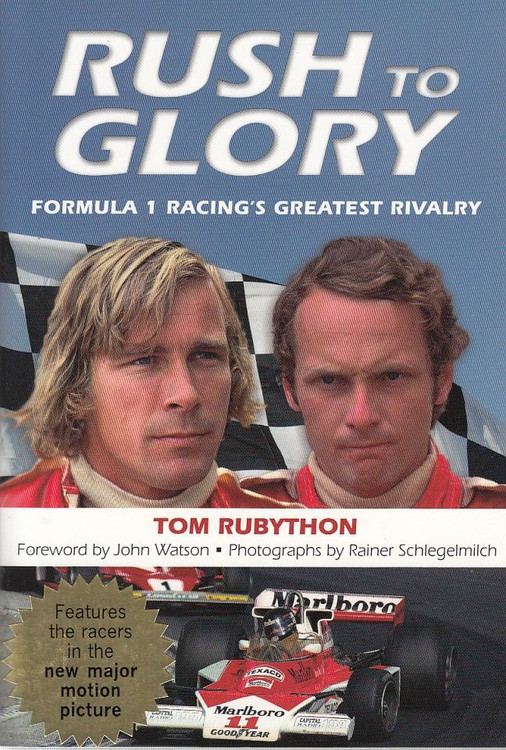 The 1976 season saw the greatest duel in FORMULA 1 history, Austrian Niki Lauda versus Britain's James Hunt, two drivers in an epic sixteen-race battle across the globe for the title, ultimately decided by a single point.

Fame, wealth, drugs, sex, and the rest of globetrotting 1970s FORMULA 1 racing are encompassed in the Lauda vs. Hunt duel. At the '76 German Grand Prix, Lauda nearly died in a fiery crash, only to emerge six weeks later—with severe burns on his face and head making him nearly unrecognizable—to pursue his rivalry with Hunt. It all came down to the last race, a rain-soaked affair in Japan, where Hunt won the championship by the slimmest possible margin.

This book is a study in contrasts during an era of Brut aftershave and disco sex parties. James Hunt, legendary philanderer and FORMULA 1 rock star, against supernatural racer Niki Lauda, who in '75 set the first sub-seven-minute lap around the Ring.
Rush to Glory is a story so exciting, dangerous, and dramatic—on the track and off—that racing will never see anything like it again.

Tom Rubython is the former editor of Fl Magazine, Business El, SportsPro, and most recently Spectator Business magazine. Throughout a thirty-year career in publishing, he has been involved in many newspaper and magazine launches. He is best known as the author of the biography The Life of Senna. Before founding The Myrtle Press, he was involved in the publishing of nine previous books.

MSRP:
Now: $49.95
Was:
Author: Christopher Hilton, ISBN 9780857333865 This is the intimate portrait of James Hunt put together from responses to the question: what is your strongest memory of him? This new edition will be...

Shunt - The Story of James Hunt

MSRP:
Now: $39.95
Was:
By: Tom Rubython . Description James Hunt is remembered more for his girlfriends and wild personal exploits than for his skills in a race car. But the excesses of his glamorous life cannot hide the...

MSRP:
Now: $129.95
Was:
By: Maurice A. Kelly . Description A book concerning Russian Limousines, and the Chinese models that were initially derived from them, has never been attempted before.This book investigates the whole...

MSRP:
Now: $23.50
Was:
By: Maurice A. Kelly . Whilst many books have appeared concerning Russian aircraft, railway locomotives and naval craft, there has been nothing published outside of Russia concerning the activities...