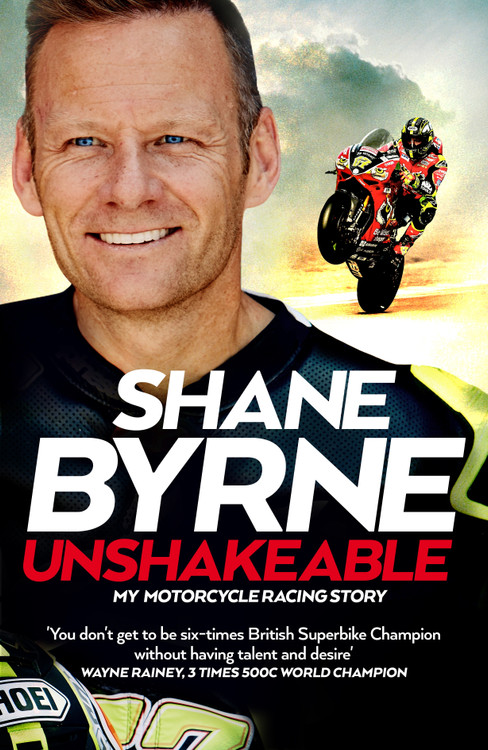 Shane 'Shakey' Byrne lives life on the edge. He is the only person to win the British Superbike Championship six times. In Unshakable he tells the story of his remarkable life for the first time; a life that has lived on, and over, the limit.

He tells of the horrendous crash in which he nearly lost his life and recounts tales of gangsters, glamour models and glory in one of the most exciting and dangerous sports on the planet, Shane’s previously untold story charts the journey from his abandonment as a new-born baby in a London city hospital to his unlikely crowning as one of the most popular British motorcycle racers of his generation.

From his humble upbringing by adoptive parents on a council estate in Kent, to working night shifts on the London Underground in order to fund his early racing career, Byrne’s unshakeable self-belief would take him from the tunnels deep below the capital city to the skies high above it, as a qualified helicopter pilot and the most decorated British Superbike Champion of all time.

AUTHOR INFORMATION
Shane ‘Shakey’ Byrne is the most successful rider in the history of the British Superbike Championship, boasting an unprecedented six titles and almost one hundred career victories – a record that promises to remain unbroken for many years to come. A World Superbike race winner and former MotoGP World Championship contender, with his cheeky Kent charm and fierce determination to win, Shakey’s success on the track has been mirrored by his popularity off it, and his army of loyal fans are testament to his reputation as one of the most celebrated British motorcycle racers of his generation. Away from the racetrack, Shane is a dedicated husband to Petra and proud father of Zack and Lilly.

MSRP:
Now: $55.00
Was:
Hardcover book, published in 2020, 376 pages 'At high speed everything becomes more difficult and more beautiful. When you're racing at 180mph, the semi-bends become bends, the little holes become...

Smoke and Mirrors Cars, Photography and Dreams of the Open Road

We Need to Weaken the Mixture (Guy Martin)

MSRP:
Now: $85.00
Was:
Hardcover book, published in 2021, 192 pages Named after Elisa, the granddaughter of Lotus's owner at the time, Romano Artioli of Bugatti fame, the Lotus Elise was launched at the Frankfurt Show in...

MSRP:
Now: $159.00
Was:
Hardcover Book, Published in 2021, 328 pages, German & English text Type a description for this product here... When car companies present studies and prototypes, they allow a glimpse behind...