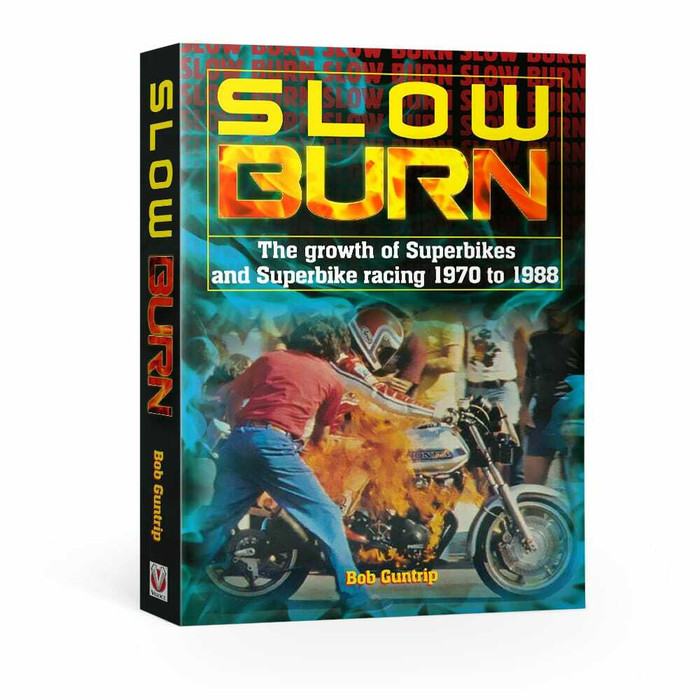 Slow Burn tells how the big names of the motorcycle industry used Superbike racing to test their street bike designs. The book features the biggest riders: Wayne Gardner, Mick Doohan, Wayne Rainey, Kevin Schwantz and Eddie Lawson, who started out on big, unruly superbikes, and learned how to powerslide their way around the world’s toughest tracks.

Slow Burn tells how the Superbike racing motorcycle developed out of the roadgoing sports-tourer to become one of the most successful competitions in all forms of motorcycle sport. As well as offering world championship class competition in its own right, Superbike racing has been a highly competitive training ground for grand prix riders, as well as helping manufacturers, distributors and dealers develop and improve their motorcycles.

Superbike racing is to the motorcycle industry what touring car or NASCAR competition is to the car world – race on Sunday, sell on Monday. All the big names were drawn into the sport during its formative years, and have been there ever since – Honda, Kawasaki, Suzuki, Yamaha, Ducati and Aprilia have all used Superbike racing to test their street bike designs. Some of the biggest riders in the sport – Wayne Gardner, Wayne Rainey, Kevin Schwantz and Eddie Lawson – all started out on big, unruly Superbikes, learning how to powerslide their way around the world’s toughest tracks. It’s all in Superbike – and it’s all in Slow Burn.

MSRP:
Now: $20.00
Was:
Cavallino The Journal Of Ferrari History Number 239 Oct / Nov 2020 The most enduring and collectable journal on Ferrari in the market for well over three decades !

MSRP:
Now: $220.00
Was:
This book focuses exclusively on the various model variants of the saloon bodied Berlina from the Tipo 105 series mounting 1750cc and 2000cc engines. All the photographs contained within the 216...

MSRP:
Now: $85.00
Was:
Signed by Darryl Flack 'Race Across The Great Divide' explores why Australia became a crucible for some of the best riders in world championship motorcycle history, and how it created...