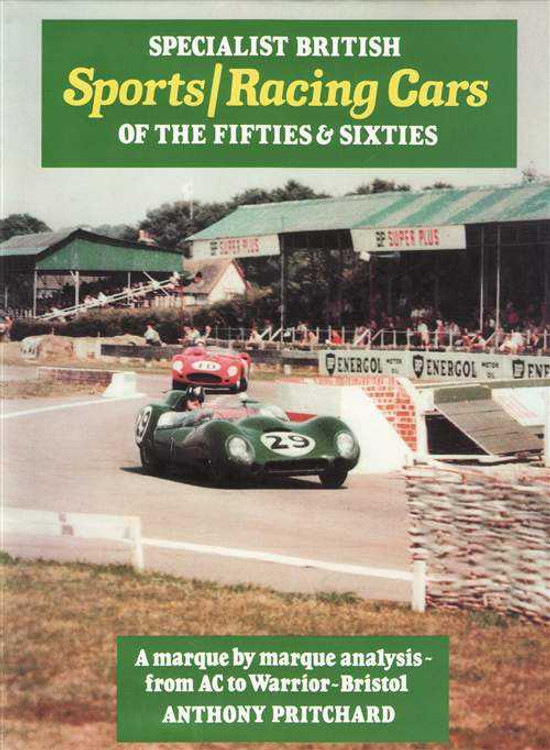 The success of British sports/racing cars during the 1950s was an integral part of the growth of British motor racing power in the post-war years. Two major British teams led from the front, Aston Martin and Jaguar...they stimulated British interest in sports car racing, and their example encouraged small enthusiast constructors and entrants. And those specialists emerged, grew and prospered. Some 40 such names are covered handsomely in this book.

Some 'worked in small workshops, sometimes only a lock-up garage, towing their cars behind old bangers or making do with a near derelict converted coach as a transporter; racing weekend after weekend at Silverstone, Snetterton and Goodwood, concentrating very often on their mainline of business during the week's working hours and preparing the cars in the evenings. This is how Lotus, Lola and others started. . . .' Some didn't flourish in a conventional way. All without fail were interesting and all played their own part in the heat of race day.

Enjoy this nostalgic look back at some superb cars from a golden age of motor racing.

Speed At The TT Races - Faster And Faster

MSRP:
Now: $69.99
Was:
By: Ross Bentley . Speed Secrets 2 - More Professional Race Driving Techniques - discover the secrets that will make you a faster and more successful racecar driver with this up-to-date insight into...

Speed and a Microphone - An Introduction to Motor Sport (Hardcover, by Richards Robin)

MSRP:
Now: $75.00
Was:
2nd hand book in very good condition, some damage to a dust jacket, see photos. Speed and a Microphone. An Introduction to Motor Sport (Hardcover, by Richards Robin) By: Robin Richards .   Other...

Special Tuning for Your MGB