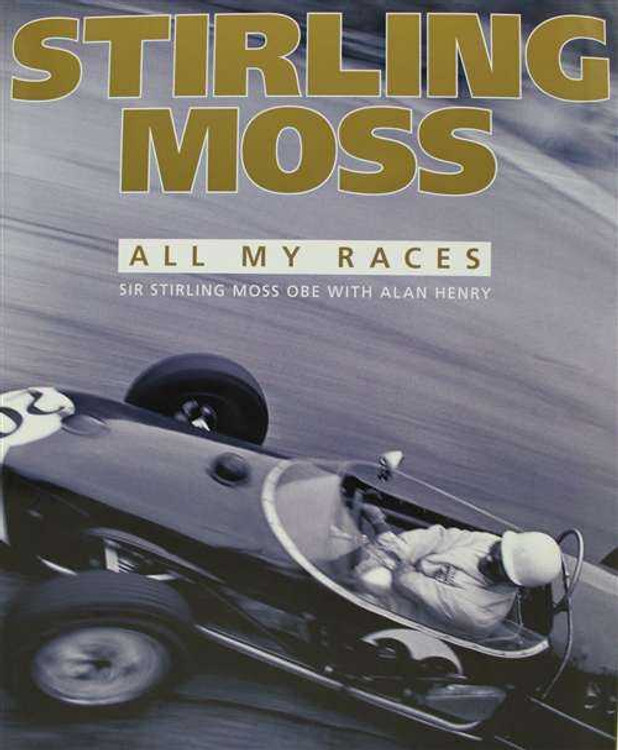 In this wonderful book, Stirling Moss: All My Races, Sir Stirling Moss OBE, Britain’s greatest ever all-round racing driver, describes every single race in which he took part in a competition career that began in March 1947 and ended with his accident at Goodwood in April 1962.

It is a magnificent story of a golden era, packed with factual detail, opinions and anecdotes, all told with an engaging blend of candour and modesty. That Stirling lived to race is seen in the sheer pace and variety of a hectic racing life that saw him compete in all sorts of events, big and small, all over the world, in an enormous variety of cars.

There were Formula 1, Formula 2, Formula 3 and sports car races – from small handicap events at Goodwood to the classic Mille Miglia road race round Italy. There were days when he might compete in cars as varied as a big Jaguar MkVII saloon and a 500cc Formula 3 car weighing only 500lb. As well as races, there were hill climbs, rallies, endurance runs and even some World Speed Record attempts.

The key statistics of Stirling’s career show that he drove in 585 motorsport events, finished in 387 of them and won 211. He started 66 World Championship Grands Prix, of which he won 16, and he also started from pole position on 16 occasions. Famously, he was never World Champion, but he was runner-up four times and finished third three times.

The big moments, of course, are all in Stirling Moss: All My Races: the astonishing Mille Miglia triumph in 1955, his famous victories in the British Grand Prix in 1955 (for Mercedes) and 1957 (for Vanwall), and the magnificent win in a Rob Walker Lotus in the 1961 Monaco Grand Prix – “probably my greatest drive in a Formula 1 race”. But all the disappointments are recalled as well.

Supporting the colourful text is a range of nearly 300 magnificent photographs that capture every aspect of Stirling’s career and almost all of the cars he drove. Previously unpublished images have been sought where possible and some rare colour views help to illuminate a period that has always been seen mainly in black and white.

Stirling’s collaborator is renowned journalist Alan Henry, who has been a regular member of the Formula 1 press corps for 36 years. He has since covered over 560 races and travelled two million miles reporting the World Championship.

All But My Life - Stirling Moss Face To Face With Ken W. Purdy

MSRP:
Now: $50.00
Was:
Edited by Stirling Moss, Hardbound, 190 Pages, ASIN: b0000ckofq, First Edition, 1960 - Ex-Library book in good condition ! Acknowledgements The editor is much indebted to the following for permission...

MSRP:
Now: $39.95
Was:
By: Steve Smith . Description all common handling problems listed with possible causes all possible chassis tuning changes and their effect on handling.   Other Details Publisher Code:...

MSRP:
Now: $59.95
Was:
Author: Don Loffler - **OUT OF PRINT** Book in excellent unread condition ** 'Still Holden together?' Well, some of the original model Holdens are still holding together very well indeed...

MSRP:
Now: $149.95
Was:
By: John Gunnell . The Ultimate Jaguar Resource Few automobiles on the road today have a heritage as rich and distinguished as the British-made Jaguar. Providing drivers with a unique blend of style,...