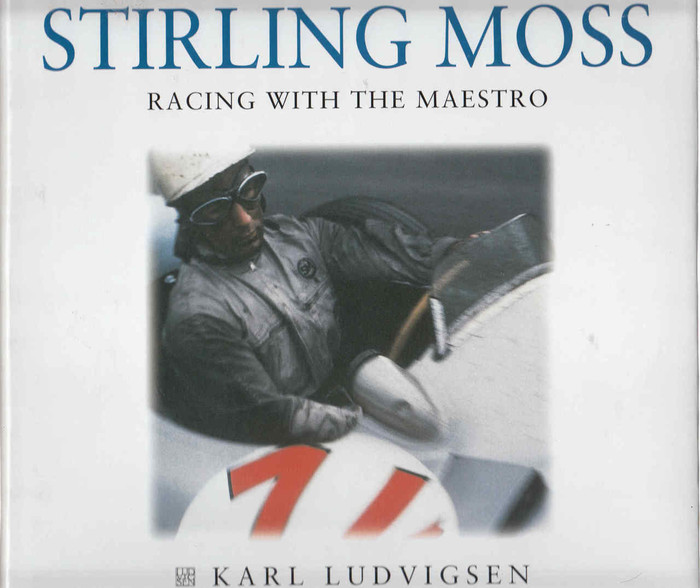 IF YOU HAD the pick of the finest images taken by some of the world's greatest motorsport photographers of the man many regard as the quickest racing driver of all time, which would you choose? That was the happy task facing Karl Ludvigsen in his creation of this celebration of the career of Stirling Moss.

His magnificent selection of colour and monochrome photographs dramatises the sport's transformation from its amateur post-war standing to the high-tech years of Mercedes-Benz and Vanwall, and onward to the rear-engine transformation wrought by Cooper and Lotus — the era in which Moss was most active.

Astonishingly versatile, Moss rallied and raced everything from 500cc single-seaters to Jaguar Mark VII saloons — winning 222 of the 494 events he entered during his competitive career.

We fast-forward, too, to the 1990s and the modern Moss who serves his sport as mentor and advocate. Superb work by such accomplished photographers as Jesse Alexander, Rodolfo Mailander, Guy Griffiths, Max Le Grand, Stanley Rosenthall, Edward Eves and Bernard Cahier portray Moss on and off the track, from his precocious youth to the mature racer whom fivetimes-Champion Juan Manuel Fangio called 'the rival I respected most during my sporting life'.

Karl Ludvigsen has known Moss for more than 40 years. His text recreates the Moss origins and career with an insight that comes from a parallel life dedicated to cars and motorsport.

He adds to our understanding both of 'what makes Stirling run', and of the circumstances surrounding the crash at Goodwood in 1962 that ended his active Grand Prix career. Ludvigsen's book will introduce an even wider circle of enthusiasts to a great sportsman who says that he would like to be remembered 'for having contributed to motor racing not as a driver but as a person'. Both driver and person are very much present in these pages.

Karl Ludvigsen is an award-winning author and historian. In series with this fascinating biography are books about Jackie Stewart, Juan Manuel Fangio, Dan Gurney and Alberto Ascari.

MSRP:
Now: $150.00
Was:
Author: Karl Ludvigsen, Hardbound, 208 Pages, 1997, Foreword by Phil Hill, 2nd hand book like new condition IF YOU HAD the pick of the finest images taken by some of the world's greatest motorsport...

MSRP:
Now: $199.95
Was:
By: Stirling Moss, Philip Porter . Stirling Moss is an icon. Even just the words 'Stirling Moss' conjure up an immediate picture - an image of speed, excitement, daring, jet-setting and beautiful...