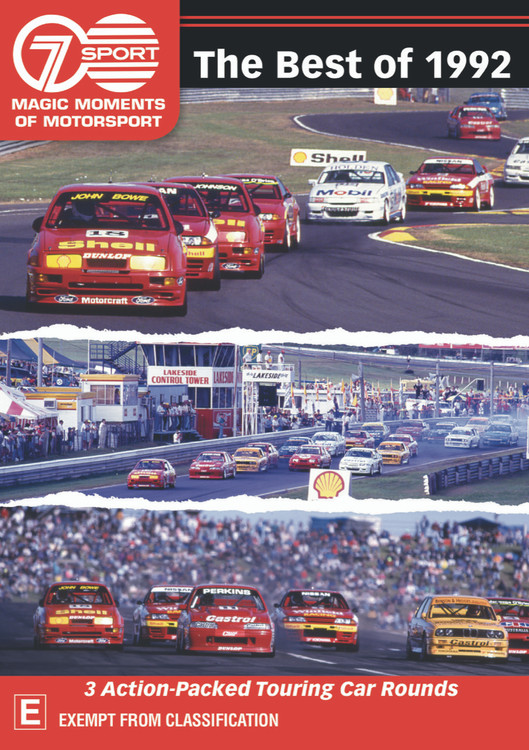 THE 1992 Australian Touring Car Championship was a classic contest between Nissan, Ford, BMW and Holden and, on this special Seven Sport’s Magic Moments of Motorsport DVD release, we take a look back at some of the best races from that year’s title fight.

We’ve collected three stand-out rounds of the 1992 ATCC as the curtain came down on the period of international Group A touring car racing rules in Australia – and the era finished with some truly ripping racing!

The first round on this release is Round 2 from 1992 at Sandown in Melbourne and Shell Sierra pilot John Bowe shows the way to the field in the pair of keenly-contested races.

As a special treat we’ve included the Formula Brabham open wheeler and Australian Production Car race from that day’s telecast as well!

Then we take in Round 5 of the ’92 title chase at Lakeside in Queensland and Tony Longhurst’s BMW is the car to beat. Again, there’s bonus action in the form of Formula Ford and HQ Holden support races.

The last event on this DVD release is the ninth and final round of 1992 at Oran Park in Sydney as Mark Skaife is crowned champion in the mighty Nissan GT-R. The win gave the future Hall of Famer the first of an eventual five ATCC/V8 Supercar Championships.

Again, there’s bonus support racing in the form of Superbikes, Formula Ford, Formula Brabham and Production Cars from this event for you to enjoy.

As another added bonus we’ve included – where possible – all of the action filmed during the commercial breaks of the main ATCC races, so you don’t miss a second of these important races from Australian touring car history!

This DVD is a must-have for your collection of Seven Sport Magic Moments of Motorsport titles, celebrating a sensational era of Australian touring car history.

MSRP:
Now: $39.95
Was:
THE first Super Speedway where NASCAR stock cars hosted a race outside North America, the Calder Park Thunderdome in Melbourne was the late Bob Jane’s dream that he turned into a reality. It...

MSRP:
Now: $39.95
Was:
WANNEROO Park holds a special place in Western Australian motorsport history and on this release we take a look back at three classic rounds of the Australian Touring Car Championship held at the...

MSRP:
Now: $49.95
Was:
Pal, Region Code 0 all regions, 458 minutes You just can’t stop BTCC, it always delivers the goods What more could you ask for? Even in the face of the worst global pandemic for more than a...