The Complete Guide To MG Collectibles 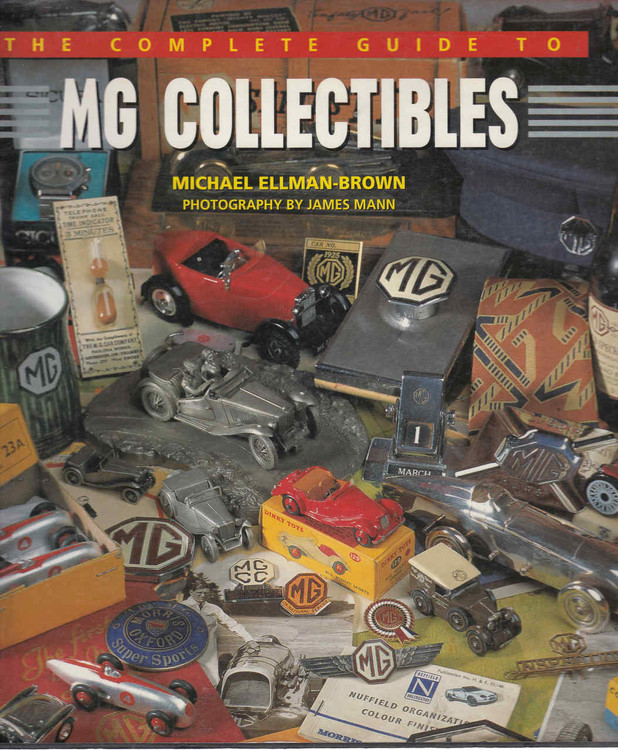 The Complete Guide To MG Collectibles

The first title in Bay View's new Collectibles series, this book reveals the extraordinary range of auto mobilia inspired by the MG marque - everything except the full-size cars themselves.

Several thousand objects are shown in over 450 colour illustrations. Their sheer variety - from trinkets to important artefacts - means that any car enthusiast, MG-obsessed or otherwise, will find appealing things to look at, backed up by informed comment from an author who is a committed collector in his own right. No effort has been spared in assembling a stunning cross-section of exhibits, painstakingly photographed on both sides of the Atlantic.

Broad themes covered include models, memorabilia, art/design, sales catalogues, books/magazines, showroom/promotional material and advertising. Memorabilia is where some of the most fascinating pieces are found, all of them sharing a marque identity: badges, ties, lighters, ashtrays, postcards, penknives, jewellery, mugs, tankards, clothing, pens, watches and much, much more. An appendix gives invaluable listings of all known MG sales catalogues, models, books and magazine articles.

Stretching back to the late 1920s, collectibles are probably more diverse and numerous for MG than for any other marque. Highlights include illustrations of the first sales brochure (literally a photo album with typed captions), studies of MG's 1930s output of sumptuous catalogues and humorous advertising, sculpture and paintings by Gordon Crosby, 'Magic Midget' silver cigarette lighters, models ranging from Gerald Wingrove's meticulous J2 to cheap 'breakfast cereal' giveaways, and MG-badged bottles of beer. Coverage comes right up to date with MGF material.

This book is an imaginary museum of treasures. All enthusiasts, whether or not they are collectors themselves, will be intrigued and charmed by what they see.

Michael Ellman-Brown sealed his destiny as a car enthusiast in 1953 when he bought a secondhand MG IC. Later he owned the nucleus of a serious MG car collection with examples of M-type, C-type, J2, K3, Qtype, R-type, PB and Park Ward TA, but now there is just one MG in his garage. A very special car, it is the last MGA Twin Cam ever made, built in 1960 to his specification as a one-off 'extra' after production had officially finished.

That first TC was preceded by an MG key ring bought as a schoolboy - his first 'MG Collectible'. Since then he has built up an important collection of MG automobilia, and this forms part of the content of this book.

James Mann is a UK-based freelance photographer who spends part of his time in the US. He visited collections in both countries for this book. His work has appeared in many car magazines, including Classic and Sportscar, Autocar and Autosport, as well as in other Bay View titles. He shot his photographs for this book on Fuji Velvia and Previa film, using Nikon F4 35mm and Mamiya RZ67 medium-format cameras.

MSRP:
Now: $69.95
Was:
By: Jean Louis Genibrel . This book is not intended to get you to Indy. This book's intent is to get you to your first kart race safely, economically, professionally, and to teach a novice the basics...

MSRP:
Now: $79.99
Was:
By: Bill Coulter . With hundreds of Mustang collectibles available, there's sure to be something to satisfy the Mustang fan in your family—from the collector who's been there from the beginning...

The T-Series MGs - A Collector's Guide

MSRP:
Now: $75.00
Was:
By: Dennis W. Parks . Whether your ride is scarred by a hailstorm, parking lot, or a full-on collision, every car owner needs to know how to repair automotive bodywork at some point. From tools and...

MSRP:
Now: $59.99
Was:
By: Richard Newton . Wether you own a trailer or are thinking about buying one, this book is the resource for you. Between these covers you'll find the answers to these and many other questions: ...

MSRP:
Now: $285.00
Was:
By: Colin Comer . Shelbys are the most iconic performance cars in the history of the American auto industry. This lavishly illustrated work conducts readers through Shelby American's forty-plus...

MSRP:
Now: $79.95
Was:
ISBN: 9340601001343 RELIVE SOME OF THE MAGIC MOMENTS OF AUSTRALIAN TOURING CAR RACING WITH THIS SEVEN SPORTS MAGIC 'MOMENTS OF MOTORSPORT DVD BOX SET. IT FEATURES THE ALMOST...

MSRP:
Now: $199.99
Was:
By: Mike Mueller . In its nearly six decades, Chevrolet’s Corvette—America’s only sportscar—has been produced in just three factories, first in St. Louis and now in Bowling...