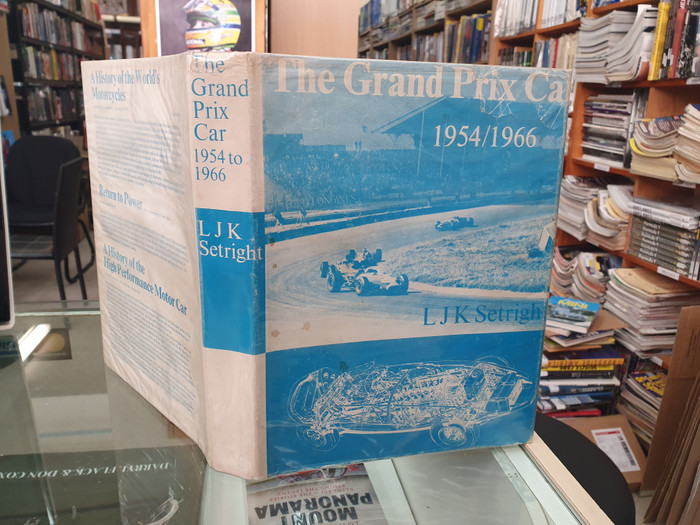 After sixty glorious years of Grand Prix motoring, the latest cars are just twice as fast as those of 1906.

Many of the most important and dramatic developments in racing cars took place between 1954 and 1966, the years covered by this book. Since 1954, new car design philosophies, new engineering difficulties, new driving techniques and new environmental features have transformed the racing car; it is a feature of this book that all these influences are discussed in a measure that will not disappoint the engineer, and in a language that will not daunt the sportsman.

Here is the story of the most fertile and competitive era in the history of motor racing. A narrative section traces the technical developments by which the classical racing car reached its zenith and yielded to a new order. An analytical section probes deeply into the theories and technologies involved—into the chemistry of fuel, the intricacies of tuning, the mechanics of construction, the dynamics of cornering, and all the many other niceties of design.

Finally, all important cars are examined in detail, • their performances mathematically compared and
their characteristics entertainingly contrasted.

This book accepts new standards in car literature, by an author well known among engineering and motoring journalists. L. J. K. Setright has been acclaimed in the press as a literary craftsman with an uncommonly shrewd and perceptive technical brain.

MSRP:
Now: $50.00
Was:
Condition - New book, however there is a crease on the back cover, see the images. By: Jesse Alexander,  Legendary motorsports photographer Jesse Alexander produced some of his most memorable...

MSRP:
Now: $95.00
Was:
By: James Taylor, 2nd hand book in very good condition The two decades between 1945 and 1965 saw some remarkable motor cars emerge from the new Rolls-Royce factory at Crewe. The Mark VI Bentley was...

MSRP: $125.00
Now: $79.95
Was: $125.00
By: Anders Ditlev Clausager . In the 1950s Sunbeam-Talbots and Alpines earned a very good name in rallying, consistently gaining awards in international events and even achieving an outright win in...

MSRP:
Now: $60.00
Was:
66 minutes of the sights & sounds DVD included. INTRODUCTION. I remember it well indeed, the "Seaforth Grand Parade," and its originator, promoter, organiser and businessman, Bruce Polain. An...