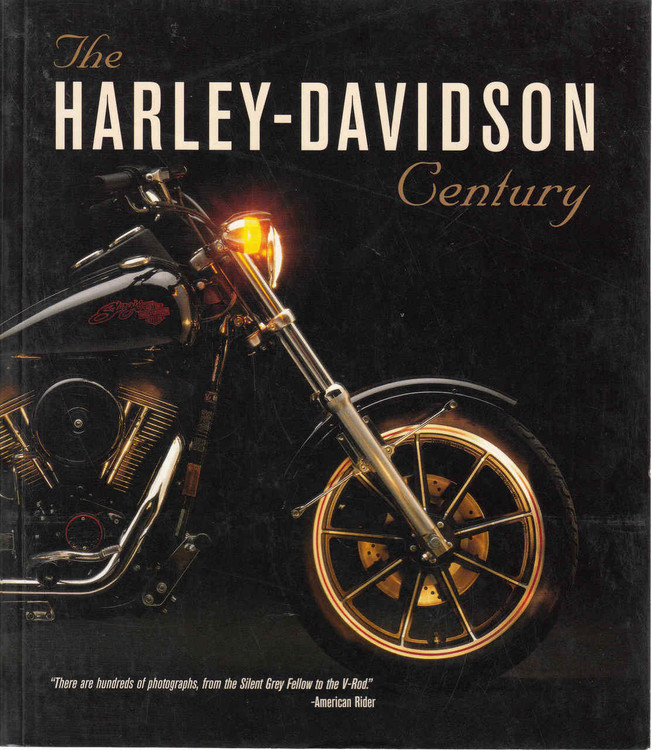 When people close their eyes and imagine a motorcycle, chances are that motorcycle looks very much like a Harley-Davidson.

"Hundreds of pictures of Harleys ancient and modern trace the breed's long evolution from powered bicycle to great grunting two-wheeled juggernaut, while also reminding the aesthetically inclined that many of these machines belong among the 20' century's purest examples of
industrial sculpture,"

In words and pictures, The Harley-Davidson Century provides the most complete history of America's motorcycle and its distinct culture ever before available.

The Harley-Davidson Century is the best way to celebrate the Motor Company's first 100 years.

Everything Harley-Davidson A Century Of Memorabilia

MSRP:
Now: $150.00
Was:
By: Michael Dregni, Nick Cedar . With more than 200 studio photos of mementos, detailed captions, and introductory text, Everything Harley-Davidson provides an entertaining account of America's...

MSRP:
Now: $49.95
Was:
By: Edizioni Gribaudo . A Harley-Davidson is much more than a motorcycle: it's a philosophy of life, a brand image that has been forged and has increased in value over a hundred years...

The Greatest Movie Car Chases of All Time

MSRP:
Now: $95.00
Was:
By: Jesse Crosse . More than a simple list, however, The Greatest Movie car Chases of All Time spans the history of the chase scene, from its roots in silent comedies to today's special effects...

MSRP:
Now: $75.00
Was:
By: Michael Dregni . Harley-Davidson motorcycles are the grandest name in American motorcycling, and represent the freedom of the open road, a life of rebellion, and a heritage of craftsmanship for...

The Haynes Manual on Brakes

The Haynes Manual On Air Conditioning