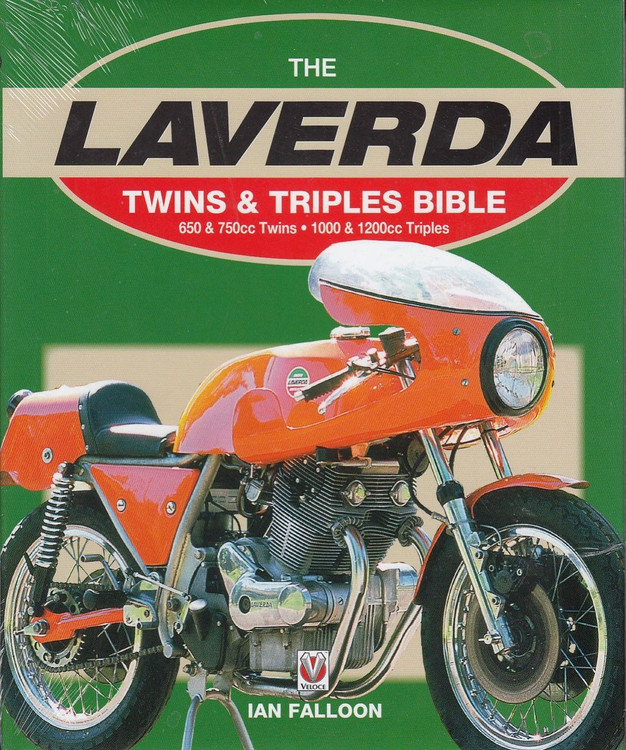 For owners and would-be owners, here is a fact packed, year by year, change by change record of Laverda's classic Twins and Triples. An indispensable source book for all enthusiasts.

From humble beginnings in 1948, Laverda made the move into large capacity motorcycles in 1966. A successful racing program led to the release of the legendary 750SFC, followed by the 1000cc triple. This evolved into the spectacular Jota and a new-generation RGS during the 1980s.

Now part of the Aprilia - Moto Guzzi - Laverda group, Laverda has acquired a following of almost fanatical proportions. The large capacity twins and triples were some of the most charismatic and exciting motorcycles produced in a golden era. With a successful endurance racing program publicizing them, Laverda's twins soon earned a reputation for durability that wasn't usually associated with Italian machinery. Originally built for the British market, the 1000cc Jota was the fastest Superbike available in its day. While the twins faded before the end of the 1970s, the triples continued for almost another decade before dying with a whimper. By this time the company was in serious difficulty and went into receivership. Despite a resurrection in the 1990s, it is the classic twins and triples of the late 1960s through until the mid-1980s that Laverda is now famous for.

MSRP:
Now: $89.95
Was:
By: Matthew Vale . 2nd hand book in very good condition, minor tear on the front cover, see the image. Description The unit-construction 650cc Triumph B' series twins were the top-of-the-range...

MSRP:
Now: $120.00
Was:
The Aston Martin DB4 G.T. is one of the most desirable cars ever made, and was raced in period by the likes of motorsport greats Stirling Moss and Jim Clark. Almost 60 years after the model...

MSRP:
Now: $695.00
Was:
By Bob King, The history of the Bugatti really begins with the development of the successful 16-valve Type 13 model dubbed 'Brescia' after its triumph in the 1921 Voiturette race in Brescia,...