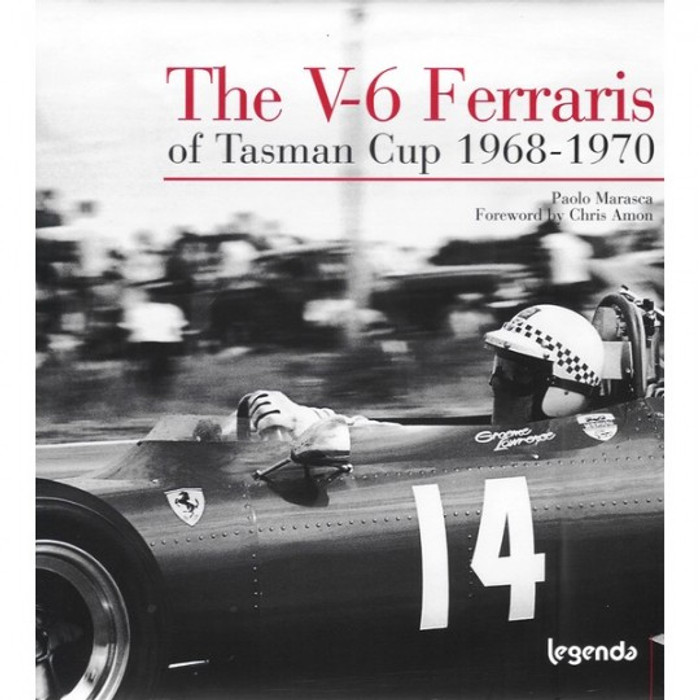 LIMITED EDITION to 2500 Copies, Each copy signed and numbered by author !!

All the races and results from the Tasman Cup races 68-70, technical specifications, drivers such as Amon, Hulme, Jack Brabham, Rindt, and many more.

Chris Amon
Fast, precise and polished: one of the finest drivers in Grand Prix racing of the Seventies.

The judgement of Jackie Stewart - one of the great in the motoring history of all time - on Chris Amon is concise but extremely meaningful. According to the Scotsman, winner of three Formula 1 World Championships between 1969 and 1973, the New Zealander driver has been by far one of the best in the Seventies.

Enzo Ferrari, the Drake, who hired Amon at the end of 1966, after the sensational victory of the very young Chris (23 years) at Le Mans 24-Hour of that year with the 7-liter Ford MkII, driven in team with Bruce McLaren, the most famous of the New Zealander Formula 1 drivers, having founded the team that for years has been the main competitor of Maranello, so described his driver.

"He is a Nazzaro of the Sixties, but without the human sensibility of Felice, unforgettable artist of the wheel on the Grand Prix Rat cars during the years before and after the 1st World War.

When he raced for us he did not achieve the successes he deserved. He won with the Sports-Prototypes, interpreting at the best the 1967 4-liter 330/P4. After racing equally with Clark at 1968 Tasman Cup, contending with him for the final success until the last Grand Prix, in the edition of the following year with the 246/FL he beat the more powerful Lotus-Ford Mk49/Ts of Graham Hill and Jochen Rindt.

He had never won a Formula 1 Grand Prix but the 1971 Grand Prix of Argentina with the French Matra, anyway not valid for the World Championship. Good test driver, actually very good, elegant and fair driver, he should have plucked up courage on race. A strength that often was missing. Afterwards he tried unsuccessfully to get over the adversities he was facing at any moment of his career by running for other teams and with other cars. Gone back to New Zealand, he dedicated to his farm and to his family. Who knows whether they will believe him when telling his kids how nearly he was to become one of the greatest racing-champions of his times?"

It was just the great skill as test-driver of Amon that in 1973 led Enzo Ferrari to ask the New Zealander to go back to Maranello to develop the 312/B3. But Chris, who was at that time the driver of Tecno in the Formula 1 World Championship, was not allowed by Martini (sponsor of the Bolognese team) to move to another team. Nevertheless in 1970 there had already been a partial return to Ferrari, when the Drake had wanted him at the wheel of the 5-liter 512/S in the endurance races of the World Makes Championship. In that year the New Zealander was running in Formula 1 for March.

In 1971 and 1972 Amon ran for Matra-Simca both in Formula 1 and endurance races. After the parenthesis Tecno in 1973, Amon has raced in Formula 1 until 1976, alternating behind the wheel of BRM, Ensign-Ford, Tyrrell-Ford and also exploring the activity of driver-constructor with an Amon-Ford car in 1974.

Paolo Marasca
Paolo Marasca has been a professional journalist since 1993. He lives and works in Milan, covering the history of motor racing. The author wrote a chapter of Ferrari Monoposto Catologo Raisonne 1948-1997 (Ferrari Single-seaters Reasoned Catalogue 1948-1997), concerning the technical history of the Ferrari 3-liter 180° engines (1969-1980).

The book was  published in Italy by Automobilia in 1997. In the same year the author also wrote for Automobilia, some monographs relating to the sports and technical history of some Maranelld.engines and racing cars, published by Ferrarissima New Series His first book has been Ferrari 330/P4, concerning the sports and technical history of the 1967 4-liter, considered both the most famous racing car of Maranello and also one of the most beautiful Sport-Prototypes of all the history of motor racing.
Ferrari 330/P4 was published in Italy by Electa, part of Mondadori Group, in 2000 and in the United States of America by MW Publishing Company in 2001. The book has been the first sports and technical monograph in the world to be dedicated to the great racing car of Maranello.

The author also wrote The Great War Ferrari-Ford 1963-1967, that will be published in the United States of America in the near future. This book is the first sports and technical monographic reconstruction in the world to be dedicated to the epic challenge of the mid Sixties between the small artisan factory of Maranello and the two greatest industrial constructors of the American automotive world, Ford and General Motors. So The V-6 Ferraris of Tasman Cup 1968-1970 is the third book of the author, the first in the world to be dedicated to the Maranello' participation in the Southern championship of the late Sixties. Among his hobbies, there are the collection of models (airplanes, racing cars, schooners), of books and memorabilia on the car competitions, of art-books on the Impressionists and Florentine Impressionists, of Jazz long-playing records, of rare golden and silver coins of Italian States before the Country Unification in 1861 and of white wines. He loves the films (science fiction, thrillers, westerns), the fish food, the literature of Georges Simenon and the vacations on the beach

MSRP: $99.95
Now: $81.95
Was:
Although not the fastest or the most powerful Ferrari, the beautiful lines of the Dino have inspired generations of enthusiasts. This book covers the full story of the Dino, from Pininfarina concept...

The Vincent H.R.D. in Australia