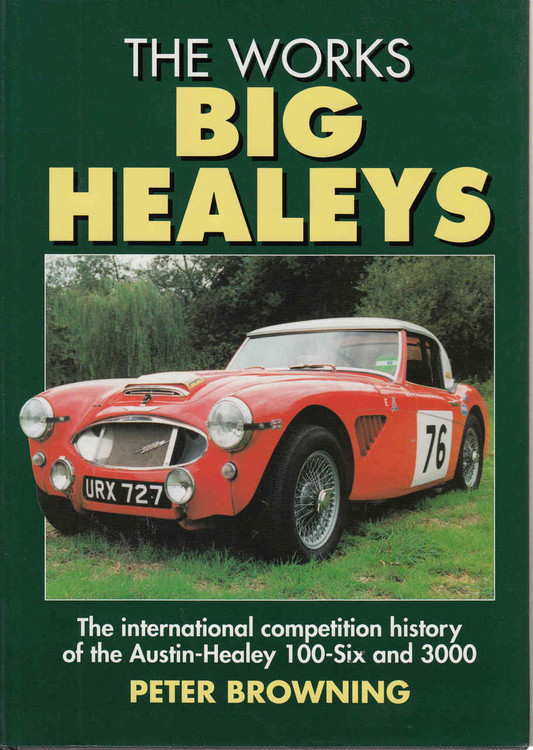 The works Austin-Healey 100-Six and 3000 were the first British rally cars successfully to challenge and defeat the dominant overseas opposition in the European Rally Championship.

Prepared and entered by the world famous British Motor Corporation Competitions Department at Abingdon, the works Big Healeys scored an unprecedented run of international class and outright rally victories during the decade from 1957.

This is the story behind those 114 international sorties, the individual histories of the 30 cars built at Abingdon and the achievements of the 47 drivers, the most successful of which were: Pat Moss, David Seigle-Morris, Peter Riley, Paddy Hopkirk, Don Morley and the flying Finns, Rauno Aaltonen and Timo Makinen.

The story covers the birth of the Austin-Healey marque, with the early competition history of the Healey 100, and there is a chapter on the works racing Big Healeys which were run by the Donald Healey Motor Company alongside Abingdon's rally programme.

There are full technical specifications and a chapter on the development and evolution of the works cars, from the first of the near-standard rallying 100-Sixes, to the last and most fully-developed 3000, prepared for the 1967 RAC Rally and previously owned by the author.

Peter Browning was the last Competitions Manager of the BMC and later British Leyland Competitions Department. He went to Abingdon as the first General Secretary of the Austin-Healey Club, worked on the BMC magazine, Safely Fast, and was later BMC Competitions Press Officer.

Big Healeys In Competition - Austin-Healey 100, 3000 and Jensen Healey in Race and Rally

MSRP:
Now: $125.00
Was:
By: John Baggott . For Donald Healey, head of a small firm manufacturing sports cars, and for the history of British motor sport, the 1952 Earls Court Motor Show was a fateful occasion. It was there...

MSRP:
Now: $69.95
Was:
By: Graham Robson . Unveiled in 1952, the Austin-Healey 100 was an innovation in the sports car market and won instant acclaim. As the series developed, the cars only became more popular and garnered...

Austin Healey The Story Of The Big Healeys

MSRP:
Now: $199.95
Was:
By: Mike Allison, Peter Browning . Description MG is Britain's best-loved sports car and has one of the finest records of achievement in competition events. So it may come as a surprise to learn that...