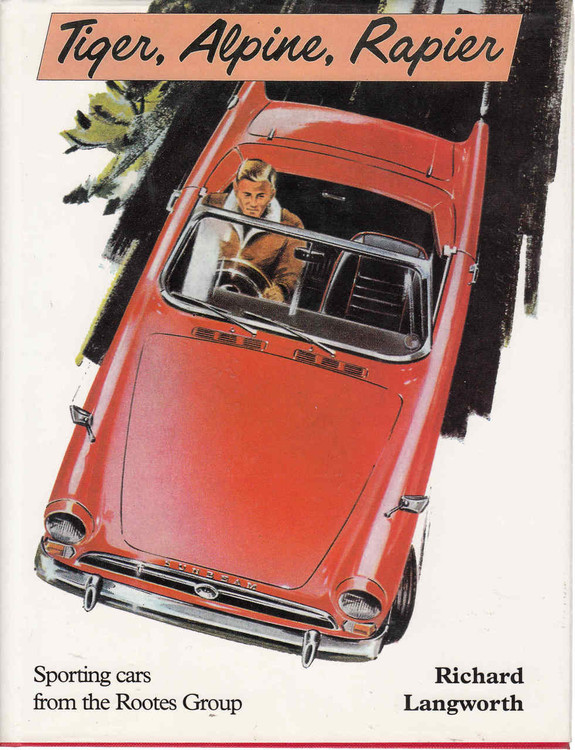 Enthusiasm knows no bounds for the sporting cars from the now-forgotten Rootes Group. Even their marque name, Sunbeam, is often deleted so that each enthusiast can pander to his particular love, be it the Tiger, the Alpine or even the Rapier. Between these hard covers Richard Langworth succeeds in telling an analytical yet cohesive tale of how all three cars are essentially one. Like a Biblical rendition, one begat another.

Langworth plunges in postwar with the Loewy-designed Sunbeam-Talbots; thosestriking-looking but somewhat sedate saloons and cabriolets, numbered 80 and 90. They begat the 2.3 litre Alpine with the louvres in the bonnet and the garlands on the Monte and Alpine rallies. Their very success made the new Rapier much more sporting than a badge engineered Hillman Minx should have been. The later 'finned' Rapier a became the sporting saloon to beat on race and rally track. The Rapier begat the Alpine, that neat two-seater, more handsome than the MGA or TR3. The Alpine begat the Tiger, the sad and glorious enigma. The Rootes Group then went missing under the Chrysler banner and nothing was ever the same.

Also discussed are the Humbers which wallowed their bulk through numerous competitions, often with remarkable success and the beginning of the Imp story, as it quickly pushed the Rootes Group under. Unquestionably a tribute to a fascinating story TIGER, ALPINE, RAPIER fills in the gaps, expands much of the development story available elsewhere, adds specification data previously undocumented and throws in a wealth of anecdotes from those who took part. Essential reading, original illustration.

The front cover illustration is typical of the Rootes Group's promotional design work of the period. The speeding Alpine comes from the cover of the Series IV Accessories brochure — an under bonnet lamp was listed at a guinea.

MSRP:
Now: $89.95
Was:
By: Walter Hassan, Graham Robson . - Authorised Mercian Reprint of the classic original ! Climax in Coventry - My Life of Fine Engines and Fast Cars - this book is an autobiography written by Walter...

MSRP:
Now: $99.95
Was:
By: Anthony Pritchard . Reprint of a title first published in 1974. Enzo Ferrari's brilliant red racing cars have been an inseparable part of the Grand Prix scene for decades. Grand Prix Ferrari...

MSRP:
Now: $195.00
Was:
By: Chris McGovern . The Sunbeam Alpine was the brain child of designer Kenneth Howes and the Rootes Group management. Designed specifically for an international market, it became one of the most...

The Scimitar And Its Forebears (Mercian Reprint)

Tickford - The Joy Of Driving

Timo Bernhard - The Story of a Champion

Thomas The Tank Engine 1945 onwards (all aboard) Owner's Workshop Manual

MSRP:
Now: $29.95
Was:
By: Chris Oxlade . Description Welcome to the Haynes Thomas the Tank Engine Manual! See how Thomas works, how his Driver operates him and how Thomas is kept in tip-top condition. Meet some of Thomas'...

MSRP:
Now: $54.95
Was:
By: David Fletcher, David Willey, Mike Hayton .**OCTOBER 2017 REPRINT** Description An insight into the history, development, production and role of the most feared battle tank of the Secon World...

This Was Trucking - A Pictorial History...

This Old Corvette - The Ultimate Tribute to America's Sports Car

MSRP:
Now: $99.95
Was:
By: Mike Antonick, Peter Egan, Allan Girdler . As many a former and current Corvette owner knows, a 'Vette is not just a car. The Corvette is an American icon revered around the globe. It is a...