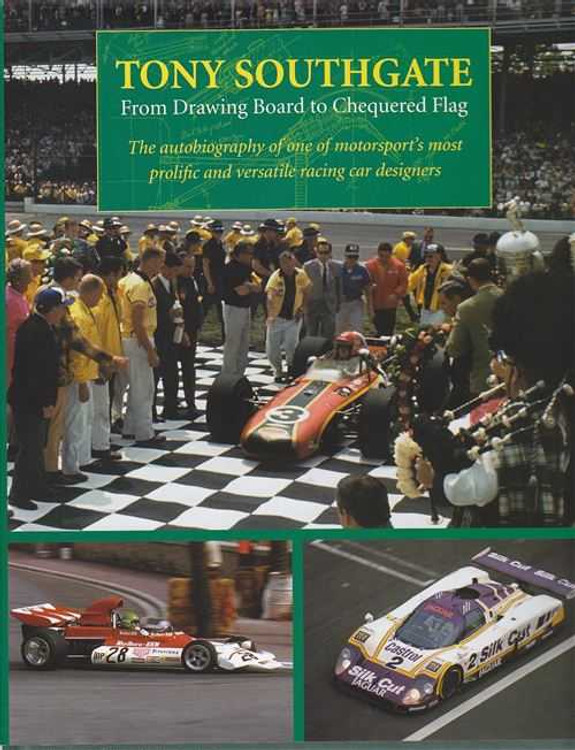 Tony Southgate From Drawing Board to Chequered Flag is the autobiography of one of the world's most famous, accomplished and versatile racing car designers, whose professional career has embraced Formula One, sports-racing and endurance racing cars and has even included an international rally challenger.

In an unmatched career that spanned almost five decades of high-end motorsport, he helped to create a wide variety of state-of-the-art single-seater and sports cars for many of the prominent specialist teams, such as Lola, Brabham, Eagle, BRM, Shadow, Lotus, Arrows and Theodore, and in endurance racing he contributed to the international competition successes of major automobile manufacturers such as Ford, Jaguar, Toyota, Ferrari, Nissan and Audi.

Cars that started their lives on Tony Southgate's drawing board have won what is widely recognized as the 'Triple Crown' of motorsport — the Monaco Grand Prix, the Indianapolis 500 and the Le Mans 24 Hours.

Major success on the race track came early in his career, which got him off to a great start and meant that he was always in demand. Throughout his professional life he was admired for his clear thinking and a spirit of innovation that ensured that whether they were instantly successful or not, his new designs were always interesting.

This important autobiography is packed with fascinating insights into the development of racing car design and engineering during the second half of the 20th century. But it is also a very personal story, revealing that for Tony Southgate, life at the cutting edge of motorsport was always an adventure. He writes about the high-pressure demands of his job as a designer, of moments of euphoria and occasionally of great sadness, and he records many fascinating anecdotes of times spent with some of the sport's most compelling personalities he encountered along the way during his long journey through the sport.

MSRP: $89.95
Now: $55.00
Was:
This is the first and only account of the Chequered Flag race team and its charismatic founder, Graham Warner. It charts the highs and lows, the victories and losses, and features interviews with the...

MSRP:
Now: $250.00
Was:
It has taken 15 years of relentless persuasion to convince Tony Brooks that he should write his autobiography. In the 1950s he revealed himself to be one of Britain's foremost grand prix drivers,...