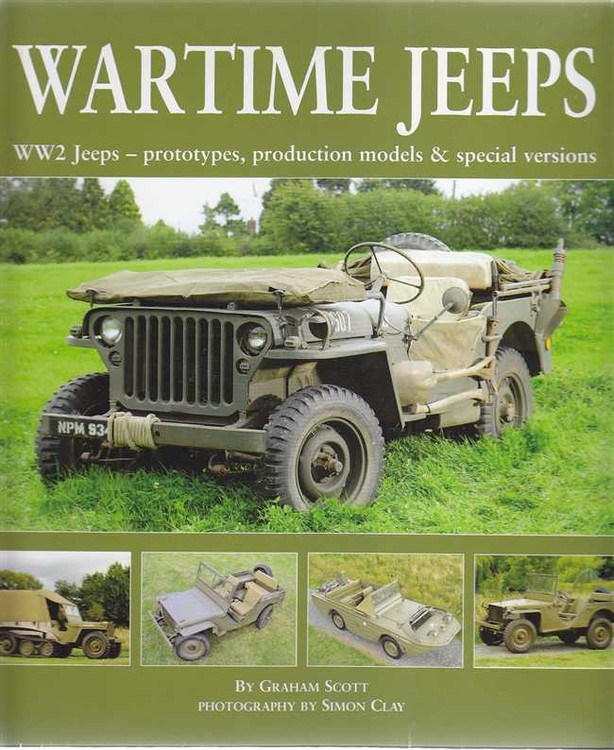 The American Jeep of World War II is one of the most familiar vehicles of all time and, having been involved in so many of the theatres of the war, Jeeps can be found almost all over the world. Simple, tough, practical, full of character and enormously capable, they can still do all the things they were designed foz and great numbers of them have been rescued and restored over the years. Today a Ford or Willys World War II Jeep is a valuable vehicle even in poor condition, which is proof of the regard in which they are held by so many enthusiasts.

Aside from the Jeep's important role in the war, it must also be recognised as the father of all the light four-wheel drive vehicles that have followed in its footsteps, from the Land Rover onwards. And it is still a match for most of them in off-road ability.

The aim of this book is not just to tell the Jeep's story, from prototypes onward, but also to demonstrate its extraordinary versatility in different shapes and forms. Eleven prototypes and variants are individually studied here:

Each model gets its own section in this book, providing a detailed description followed by a gallery of specially commissioned colour photographs with detailed captions.

The American Jeep In War And Peace

MSRP:
Now: $79.95
Was:
By: Peter C. Sessler . You're invited behind the scenes to witness the abundant variety of Jeep prototypes and concept vehicles. Jeep has undergone many ownership changes during its lifetime. Yet...

MSRP:
Now: $99.95
Was:
By: Steve Statham . From the early prototypes produced in 1940s to today's Liberty, Jeep has been known for its ruggedness and durability. Jeep chronicles the history of this American icon and...

MSRP:
Now: $59.99
Was:
By: Greg Raven, Chad Erickson . Description Turn your VW into a high-performance machine. Chad Erickson explains everything from low-buck bolt-ons to CNC-machined mods. Learn how to choose, install,...

MSRP: $89.95
Now: $49.95
Was: $89.95
By: Richard Copping . The combination of model history, coupled to hot hatch performance, all comprehensively illustrated through major photo shoots and detail pictures, make this the complete guide...

MSRP:
Now: $29.95
Was:
By: Derek Smith, Graham Bleathman . Description Following the success of the Cracking Contraptions Manual, Wallace has pulled the dust sheets off a further 20 of his ingenious inventions, from the...

MSRP:
Now: $79.95
Was:
By: Karl Ludvigsen . It was no small leap for Porsche from its giant-killing Spyders to the powerful Type 917 that swept all before it. The gap was bridged by its 900-series sports- racing cars,...

MSRP:
Now: $59.95
Was:
By: Pat Braden . Select & Install, Tune or Repair WEBER CARBURETORS Learn how Webers work and what to change for improved performance. Comprehensive chapters include: Carburetion basics...