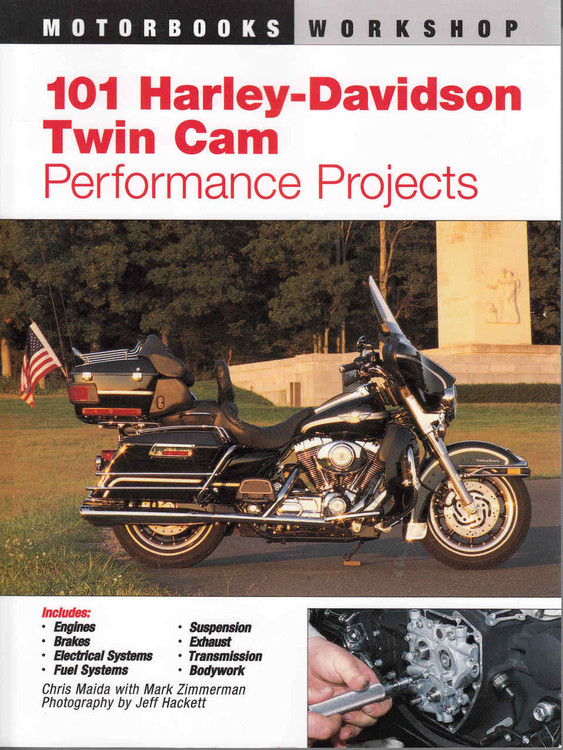 In 101 Harley-Davidson Twin Cam Performance Projects, experienced mechanics and motorcycling journalists Chris Maida and Mark Zimmerman guide accomp you through the important steps of upgrading the major onents of your motorcycle, while adding some style in the process.

From simple maintenance, like replacing chains and belts, to complex suspension or fuel injection modification, you'll be ready to take on any weekend project. They'll explain the tools, skills, and cost involved, as well as handy tips known by the pros. With over 100 projects, there's bound to be something for everyone.

If you've ever wanted to do it yourself, but were afraid of the cost, frustration, or simply didn't know where to begin, 101 Harley-Davidson Performance Projects is your one-stop resource, and the best tool in your garage.

Many thanks for taking the time to read this. Most people, including myself, skip this part. The exception is when I'm curious about what the authors are trying to accomplish, so I'll be sure to do that by the end of this paragraph. Another reason why I'll read this type of page is when there's a reoccurring element in the book that I want more info about.

In 101 Projects For Twin Cams, that would be the Information Boxes that you'll find in every project. What we are trying to accomplish is to simply provide you with what you need to modify your Harley-Davidson Twin Cam motorcycle the way you want without making costly and aggravating mistakes.

Each project comes complete with an Information Box, which gives you, in a concise form, what you need in the form of time, money, skill, parts, and tools to do that project. The time and money values are often given in ranges, since there are a number of things—like what manufacturer's parts you use that can affect how much a job will cost in cash and hours.

As for the skill levels, a Level One rating means anyone who knows what end of a tool to use should be able to do that project. Level Two means you should be familiar with :ools and machinery. A Three rating indicates that you should be comfortable doing Level One and Two projects,

As well as working on complex assemblies. Level Four projects require very special tools and the training to use them properly. These projects are for mechanics that have been successfully spinning wrenches for a number of years and ale ready for a more complex job.

The parts and tools listings tell you what you'll need to o that particular job. You'll notice that the tool and parts lists for some engine projects are very specific, while others are more general. This is because the engine projects cover scecific installations on a Twin Cam engine, and since the A ' rubber-mount) and B (counterbalanced) engines are almost identical, I'm able to tell you exactly what you'll need. In contrast, chassis and some engine projects cover a wider range of options, so the parts and tools lists are more general. For example, a tool list may just say, "Basic hand tools." A look into the first section, lArork and Tools, will list what this encompasses.

The aim of some projects are to educate the reader about systems and theory rather than give a step-by-step install. Some projects are engine related and have instructions as well as a series of installation photos, just like the tech stories I write for American Iron Magazine as its editor.

Each Information Box also has Tips, which are bits of information that will hopefully make the job go a little easier. There are also Performance Gain and Complimentary Modification listings. The first tells you what you'll gain by doing that particular project, whether it's horsepower or "bling" factor. The second gives you some advice, as in what project we suggest you can also do when bolting up the project at hand.

Finally, it's time to thanks the people that helped make this all happen. First on the list is my buddy Mark Fabrizi, the owner and head wrench of Marquee Customs & Classics. Most of the engine install sequences were shot at Mark's shop, with him doing the installation. Readers of American Iron Magazine should recognize his big hands, as they've seen them often in AIM tech stories. Our thanks also go to the crew at Harley-Davidson of Danbury, Connecticut, for their help, as well as Fred's Auto Machine Shop. We also extend a huge thanks to the many manufacturers who participated in the installations, which, of course, made them and this book possible.

MSRP:
Now: CAD84.47
Was:
By: Kip Woodring, Kenna Love . Keep a veteran mechanic at hand with this updated version of the best-selling manual for Harley-Davidson owners who want to hop up their machines. Created with the...

MSRP:
Now: CAD56.28
Was:
By: Jerry Smith . Harley-Davidson is synonymous with powerful, functional, American motorcycles. As a result of their growing popularity, the number of Harley-Davidsons on the road is multiplying at...

MSRP:
Now: CAD93.82
Was:
By: Moses Ludel . Few motorcycles evoke the passionate experience that comes with owning and riding a Harley-Davidson. Like cruising down the interstate with the wind in your face; rolling on the...

MSRP:
Now: CAD75.09
Was:
By: Colin Date . 101 GM Muscle Car Performance Projects - This book has been written for muscle car fans looking to restore, enhance, and ultimately, drive their cars. Many of the most popular cars...

MSRP:
Now: CAD84.47
Was:
By: Kip Woodring, Kenna Love . Keep a veteran mechanic at hand with this updated version of the best-selling manual for Harley-Davidson owners who want to hop up their machines. Created with the...

MSRP:
Now: CAD75.09
Was:
Covers All E301E36 Cars Engine and Transmission Suspension, Wheels, and Brakes Electrical Systems Fuel Systems and Exhaust Since its introduction in 1975, the BMW 3-series has earned a...

MSRP:
Now: CAD75.09
Was:
By: Colin Date . 101 GM Muscle Car Performance Projects - This book has been written for muscle car fans looking to restore, enhance, and ultimately, drive their cars. Many of the most popular cars...

101 Performance Projects for Your Pickup and SUV

MSRP:
Now: CAD46.89
Was:
By: Wayne Scraba . It offer helpful secrets, suggestions, techniques and hints to solve common problems and generally enhance all areas of a car's performance, whether it's for the street or for the...