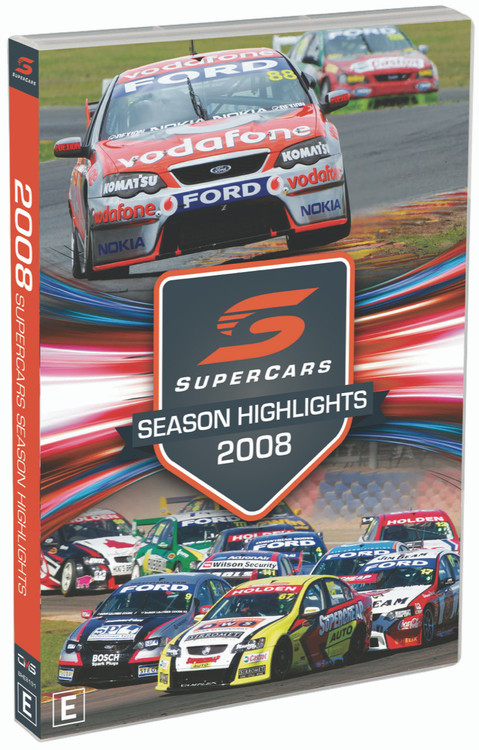 The 2008 V8 Supercars Championship Series was a year of celebrations and farewells.

It commenced with the Clipsal 500 celebrating 10 magnificent years of racing and, after 14 hard fought rounds, it concluded in a farewell to Oran Park Raceway and the crowning of Team Vodafone’s Jamie Whincup as the 2008 Champion.

Team Vodafone dominated the on track action with six round wins including the team’s third win in a row at the Supercheap Auto Bathurst 1000. The season was not, however, completely without challenges.

A crash during qualifying in the inaugural Hamilton 400 saw Whincup sidelined for the weekend. Toll HRT’s Garth Tander took the win for that round. The former Champion had four round wins in total and placed 3rd overall for the season. Ford Performance Racing’s Mark Winterbottom was another strong competitor with two round wins and made up the top three in 2nd place.

2008 was also the year V8 Supercars farewelled one of the most successful and prolific touring car drivers in Australian motorsport, Mark Skaife. With five Championships and five Bathurst 1000 wins, Skaife will be missed by drivers and fans alike. Paul Morris also retired from full time racing making the decision to concentrate efforts on his team.

The 2008 Highlights compilation offers all the best of a year full of celebrations, farewells and action!

MSRP:
Now: $39.95
Was:
The 2007 V8 Supercar Championship Series was a stellar year for Australia’s favourite motorsport category. It began with a memorable dual between Rick and Todd Kelly at the Clipsal 500 and went...

MSRP:
Now: $39.95
Was:
The 2012 V8 Supercars Championship season started in a familiar fashion with the Triple Eight Racing VE Commodore of Jamie Whincup dominating proceedings in the early stages of the season. Whincup...

MSRP:
Now: $39.95
Was:
History made in earnest on the Mountain; a breakout year for a young star; and the indisputable dominance of a recent giant of the track in 2014, the V8 Supercars Championship once again delivered...

MSRP:
Now: $39.95
Was:
2011 saw the V8 Supercars Championship season dominated from the outset by Triple Eight drivers Jamie Whincup and Craig Lowndes. Whincup, eager to regain the drivers’ Championship he had...

MSRP:
Now: $69.95
Was:
By: Amonite Press . This unique collection of photographs from the Press Association archives, many unseen for decades, allows a rare insight into a century of British motorsport. A century in which...

MSRP:
Now: $250.00
Was:
By: Doug Nye, Tony Rudd . Rerpint. 2nd hand book in excellent like new condition   "While I appreciate the view that the car has become a joke in the minds of the Music Hall star and...