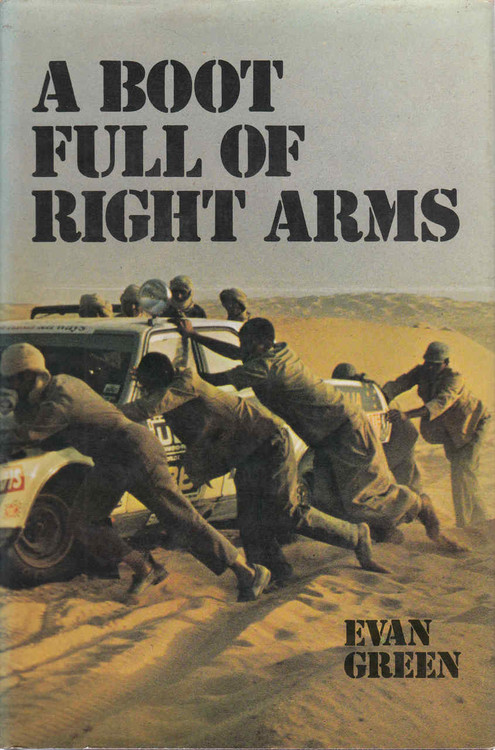 I'd give my right arm to be going with you' was a saying Evan Green heard many times in the weeks before he left Australia to compete in the London—Sahara—Munich World Cup Rally. He had dozens of offers. Enough arms, in fact, to fill the boot of the big and unusual car he chose for this 17 000 km event.

The volunteers might have been less enthusiastic had they known what lay ahead, for the rally soon crossed the boundary separating motor sport from high adventure. And went further. Crews became stranded in the desert. Some almost died of thirst. Most were lost. Only one car covered the full course of this extraordinary event.

For the motoring enthusiast, this book gives a fascinating insight into the world of international rallying. Recollections of preceding motoring marathons and portraits of famous drivers are interwoven through the story. Anyone who has ever driven a car or planned a journey will be intrigued by details of why the car was chosen, how it was prepared and how such a project was financed.

But this is more than just an account of a rally. It is a story of a journey through fourteen countries, across some of the world's most forbidding terrain, and of the strange places and people encountered.

The night before Evan Green left Sydney to compete in the London—Sahara—Munich World Cup Rally, he was delivering a lecture to an historical society on the exploration of inland Australia. It's not what you'd expect from a rally driver, but neither is Evan Green. As a traveller of his own country, he probably holds some sort of record in having driven around or across the continent twenty-five times.

Those journeys ranged from Around Australia Trials to leading the first overland expedition to cross the continent through the middle from east to west. Not that all his motoring has been confined to Australia. He has driven on all continents except Antarctica and made the overland journey between London and Sydney on three occasions.

Is travel his full time occupation? By no means. He began his career in journalism, was seduced to the world of public relations and advertising and for eight years was an executive with an Australian car manufacturer. In 1971, he returned to journalism to become motoring editor of the Sun-Herald and television commentator for ATN-7 in Sydney. And to write books, like A Boot Full of Right Arms.

MSRP: $89.95
Now: $55.50
Was:
This is the first and only account of the Chequered Flag race team and its charismatic founder, Graham Warner. It charts the highs and lows, the victories and losses, and features interviews with the...

A Classic World & When The Engine Roars (George Begg)

90 Years of Nürburgring - The History of the Famous 'Nordschleife'