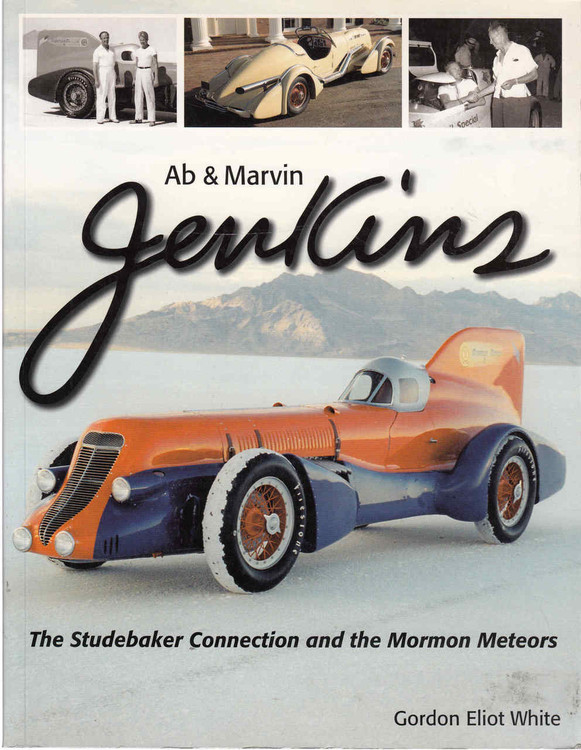 This book of course could not have been written without the help of Marvin and Noma Jenkins. Nowhere, I believe, are a pair of more cheerful, active, helpful octogenarians. Marvin has lived with the Ab Jenkins legend all of his life and Noma has been a part of it for 65 years. In 1941 Marvin was awarded AAA racing license #157 and since then has driven the two Mormon Meteors more miles than his dad. In the 1990s, when Meteor III was a dilapidated object, mouldering away in the basement of the Utah State Capitol, Marvin stepped forward, fought to have it treated properly, and when the State dragged its feet, retrieved it from the bureaucrats and restored it with his own hands. The legend belongs now to both father and son.

I have known Marvin and Noma for more than 25 years. I have been familiar with the Meteor III since I saw it at an exhibition in Linden, New Jersey, in 1951. During my 33 years as Washington Correspondent for the Salt Lake City Deseret News I often visited the Utah Capitol to marvel at the huge yellow racing car that ran so faithfully on the Bonneville Salt Flats. When it became known that the car had been mistreated by its state custodians I would rattle the cage of Utah Governor Norman Bangerter about the car when he visited Washington. I am sure the Governor thought he had more important things to talk about with Utah's members of Congress than an old racing car, but I would not let him forget it.

When Marvin was restoring the Conqueror engine in the Meteor III there were few sources of information on it. The big V-12 was seldom flown in commercial aircraft; its chief use was to power the Air Corps' Curtiss P-6 fighter of 1927, so few were built and fewer of course survive. An aviation buff in Nebraska had salvaged fragments of a P-6 from South America and was building a replica from the scraps, including pieces of a Conqueror engine. The U.S. Air Force Museum in Dayton, Ohio, provided an engine manual. I helped track down those sources for Marvin's restoration, thus learning much more about the Meteor's power plant than I had known before.

While I was doing research for my 1996 book on Fred Offenhauser and his engines, I discovered that Marvin had helped build the mighty Novi engines in 1940, shuttling between the Offenhauser shop, Leo Goossen's drafting office and Bud Winfield's garage in La Canada, California. He was a great help to me with that book.

While doing the research for this book Angela and I visited Mary and Noma again in St. George, Utah, and spent two and a half days going through the immense collection of Jenkins memorabilia and records that Marvin and Noma have so carefully preserved. As he was in 1995, in 2004 Marvin was extremely generous with the loan of photographs, the providing of copies of written and printed material, and with his own time and memories.

Jon Bill, at the Auburn-Cord-Duesenberg Museum in Auburn, Indiana, was most generous with his files on the Meteors when we visited in 2004. Fred Roe, a distinguished historian of Duesenberg automobiles and author of Duesenberg, the Pursuit of Perfection (Dalton Watson, London, 1982), was likewise quite generous with his time and materials on the cars, including copies of 1951 correspondence between Ab Jenkins and the late J.L. Elbert, author of Duesenberg, The Mightiest American Motor Car (Dan R. Post Publications, Arcadia, California, 1951).

The pages of Automobile Quarterly, 1962-2004, provided checkpoints on the Jenkins history. Likewise the files of the Los Angeles Times, the New York Fines, the Chicago Tribune and the Washington Post, searched through the auspices of ProQuest, the Library of Congress and the Godfrey Library, provided corroboration of history that came from the memories cif many sources.

I have also relied to a great degree to my own files of the Bergen Herald, National Auto Racing News, National Speed Sport News, Illustrated Speedway News and Speed Age Magazine as well as my own microfilm records consisting of some 6,000 documents from the records of the Contest Board of the American Automobile Association, 1902-1955.

To my wife, Angela, I owe a debt of gratitude for her acceptance of my single-mindedness for many months on the subject of the Jenkins and for her editing of the text for those things that seemed clear to me but were incomprehensible to those not already steeped in Jenkins history. She is also a gifted interviewer, particularly skilled at asking questions that occur more easily to a woman than to a man whose interests run more to hardware than to the important personal side of the racing game.

As always, the final product, and whatever errors may exist in the text, are my responsibility alone.

MSRP:
Now: $79.95
Was:
By: Howard L. Applegate . Studebaker built its first automobile in 1902. Although production ceased in 1964, Studebaker automobiles and trucks remain favorites among transportation enthusiasts and...

MSRP:
Now: $49.99
Was:
By: Andrea, David Sparrow . During the 1950s, Abarth started work on modified components with a number of manufacturers, but it was for its collaboration with Fiat that the company became renowned...