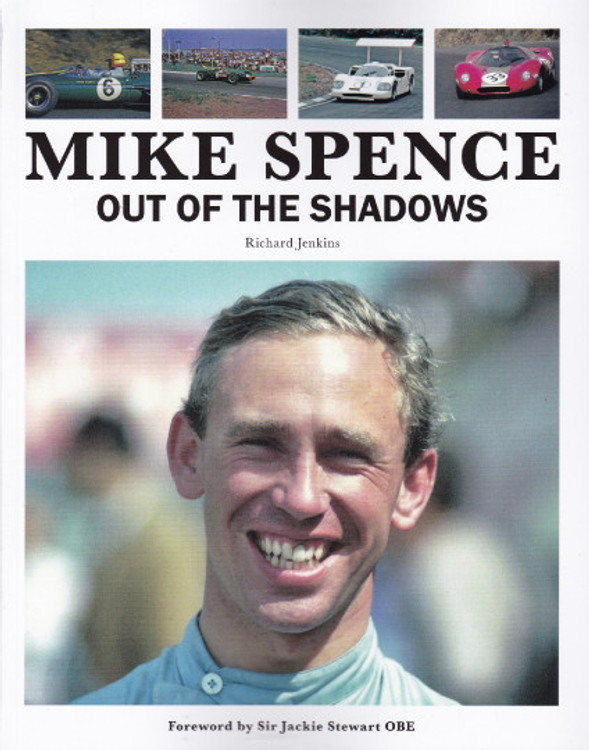 Mike Spence was one of the most liked and respected drivers of grand prix racing in the 1960s. A loyal friend and team-mate of Jim Clark, Mike also raced for BRM and Emeryson in Formula One and in sports car racing, he drove the iconic Chaparral 2F. He forged a reputation as being an outstanding development driver with real mechanical sympathy.

He was at his peak and was on the cusp of winning both the Indianapolis 500 and becoming a winner in grand prix racing when he was killed in a practice accident at the Indianapolis Motor Speedway on 7 May 1968.

There are not too many two-time Formula One race winners that have not merited a published biography of any description, but at long last this modest, laconic and quiet man gets the focus that he deserves in what will be the definitive and only authorised biography of his life.

This was no mere ‘number two’ driver to Jim Clark, Phil Hill or Jackie Stewart; this was someone who worked in the shadows to achieve the optimum performance for everyone he raced for.

Award-winning author Richard Jenkins follows up from his debut book – Richie Ginther: Motor Racing’s Free Thinker – with all the same hallmarks that saw his first book win multiple awards: comprehensive research, a balanced, thoughtful, flowing and detailed narrative and numerous photos that have never been seen before, including some from Mike’s personal collection.

With contributions from Mike’s widow, his brother and his former long-time mechanic, there are unique personal insights into Mike as a person, It is testament to Mike’s reputation among his peers that the likes of Richard Attwood, Jim Hall, David Hobbs, Alan Rees and Sir Jackie Stewart, and many others, have been involved in helping to tell Mike’s story as he now comes out of the shadows into full focus.

Mike Spence: Out of the Shadows is written by Richard Jenkins, who won the prestigious RAC Motoring Book of the Year Award for his debut title, Richie Ginther: Motor Racing’s Free Thinker.

King Of The Road By Richard Petty

MSRP:
Now: $45.00
Was:
From its launch on 20 September 1961 the Mini Cooper caused a sensation. The world’s first sports saloon, the diminutive Cooper combined the glamour and racing heritage of 1959 and 1960 Formula...

Volkswagen Beetle - How to Build and Modify (Eric LeClair)

MSRP:
Now: $65.00
Was:
Build and modify your Volkswagen Beetle using today's greatest aftermarket parts while implementing historic and modern modifications! If ever a car rolled off the factory floor in the form of a...

MSRP:
Now: $29.00
Was:
This book takes the Immortals concept made famous in cricket andapplies it to motorsport, choosing the best of the best from Bathurstand the Australian Touring Car Championship (now the Supercars...

MSRP:
Now: $129.95
Was:
Hardcover, Published in 2021, 304 pages, Author: Peter Higham This instalment in Evro’s decade-by-decade series covering all Formula 1 cars and teams is devoted to a period when some normality...