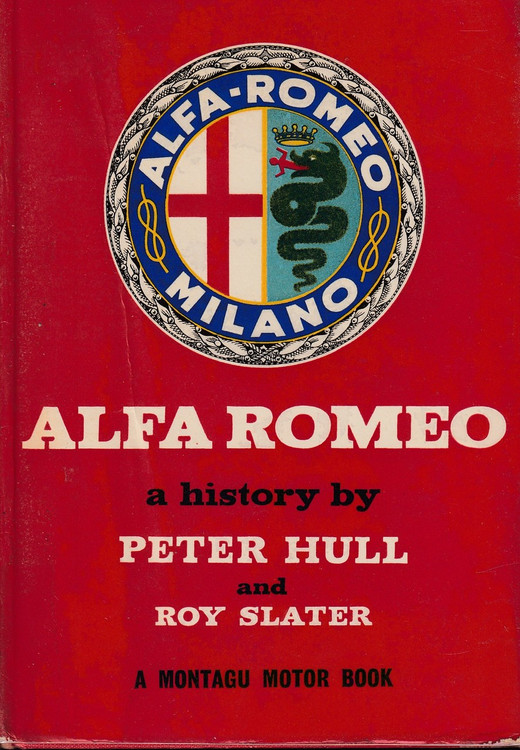 "The racing history of Alfa Romeo is also the history of the most romantic and glorious period of big time racing," says Count Johnny Lurani. In this magnificent history, Peter Hull, aided and abetted by Roy Slater, traces the rise of Alfa Romeo from its earliest days in 1910 when only three models, the 20/30, 15/20 and 40/60, were being produced at a small factory on the outskirts of Milan, up to the introduction in 1963 of the new Giulia Saloon model and the building of a vast new plant at Arese, with a production capacity of 700 vehicles a day.

In 1914 Giuseppe Campari, one of the famous Alfa racing drivers, created a record by covering a flying kilometre in the eliminating trials for the Circuit of Brescia at a speed of 147.540 kph. But Alfa Romeo did not make their real debut in Grand Prix racing until the 1924 French Grand Prix which they won. 1924-25 established them as the Grand Prix Champions of the world, due partly to the introduction of the famous "P2" model and partly to the formidable team of drivers—Giuseppe Campari, Antonio Ascari and Count Brilli-Peri. In 1929 came the founding of the Scuderia Ferrari, the birth of the popular supercharged twin-cam 1750 model and the addition of Tazio Nuvolari to the team.

Over the next two decades success followed Alfa Romeos wherever they went, in sports cars as well as in Grand Prix racing, and they remained unchallenged in the field of the Grand Prix. 1950 was a victorious year of eleven starts and eleven wins.

Then, in 1951, with Juan Fangio as the new world champion, they withdrew from the Grand Prix circuits.

However, this book is not purely about the racing and production history of Alfa Romeos. It is also an enthusiast's maintenance handbook which covers every major pre-1940 Alfa model. Roy Slater's detailed appendixes, racing and technical, give a concise, all-round view of the facts and figures of this renowned marque, and over a hundred photographs, many of which have never been published before, add to an outstanding work in the field of motor car history.

PETER HULL is a regular officer in the R.A.F., and Chief Flying Instructor to the Cambridge University Air Squadron. A vintage sports car enthusiast of long standing, he has owned a 1927 Alfa Romeo 22/90 as his only car for ten years, and has on occasion raced a pre-war motorcycle, a vintage aeroplane, a vintage sports car and an historic racing car. He is a founder member of the Alfa-Romeo section of the Vintage Sports Car Club, and Press Secretary of the V.S.C.C. He published his first book, Racing an Historic Car in 1960.

H. ROY SLATER lives in London, and is a stockbroker. His hobby is the repair, restoration, maintenance and driving of Vintage Sports Cars and any Alfa Romeos.

The History of Alfa Romeo - The Definitive Story DVD

MSRP:
Now: $95.00
Was:
By: Factory . This book is a supplement to main repair manual covering Alfa Romeo 33 models from 1986 onwards.   Other Details Publisher Code: ALFA33SSUPP ISBN...