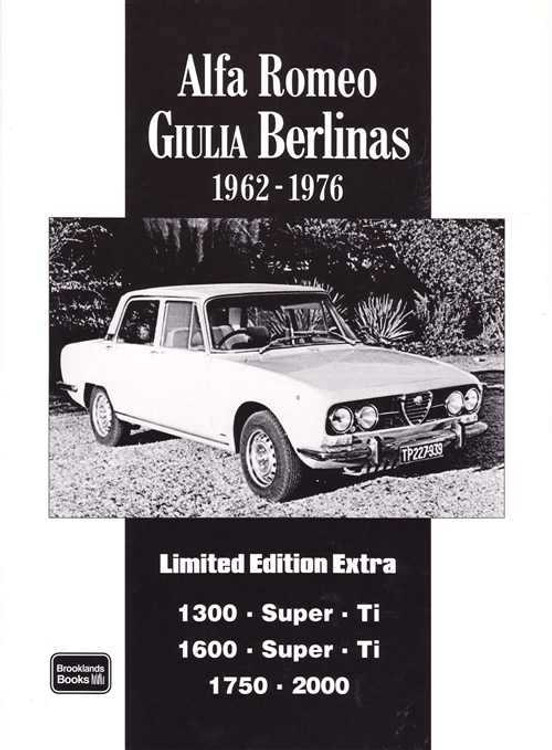 Alfa Romeo talked about its Giulia series as having been styled by the wind, that its unusual lines were perfected in a wind tunnel. Be that as it may, the media unkindly described it as being an ugly duckling. Whatever your opinion, there can be no doubt that back in 1962 when it was released, nobody could have foreseen the fact that it would become an icon of the Italian motor industry.

Under that aerodynamically sound, if somewhat controversial, exterior lay a refinement of a platform that chief engineer Orazio Satta Puliga, a legendary figure in Alfa Romeo folklore, designed for the Giulietta range that preceded the Giulias. It consisted of coil springs and wishbones at the front, live axle and coil springs at the rear with a T-piece above it to control its movement. Initially the brakes were Alfin drums but by 1964 became four-wheel disc brakes and recirculating ball steering that was known for its weightiness (it was nowhere near as precise as a rack and pinion system, for example) and large turning circle.

Under the bonnet was Satta's jewel, his donation to automotive engineering and history - the all-alloy DOHC in-line four-cylinder engine that came in two capacities for the Giulias, 1.3 and 1.6 litres. For their time these engines were widely regarded as the best small four-cylinder units being made, they were beautifully balanced and revved oh so sweetly to the red line and gave a decent burble from the exhaust. It had an enviable reputation for reliability and longevity, both on the road and race tracks of the world. In standard tune the engines produced 80bhp and 90bhp respectively which was sufficient to give the sedans a maximum speed of 100mph and 109mph, making them quite possibly the quickest four-door family sedans in their class in the world at the time. In TI guise they were even more powerful and faster. In 1970 the Giulia series gave way to the larger and far more refined (and expensive!) 1750 sedan that was a further extension of Satta's original design.

The DOHC all-alloy engine retained the same architecture and the running gear remained the same. Less than two years later the 1750 gave way to the final flowering of Satta's original theme, the 2000 Berlina. These two sedans, conservatively styled by Bertone, were superb sports sedans in the European idiom; think about it for a moment, they had 114/131 bhp directed through a 5 speed gearbox (an Alfa speciality for decades, long before it became fashionable with foot pedals through the floor and perfectly placed for heel n toe downchanges, powerful all-disc braking system, an ability to carry 4 people and luggage easily across Europe at high speed (112-118mph) and, again, a neat burble from the exhaust. Only BMW with its 1800 and 2000 Neue Klasse sedans came close. By the mid 70s the rest of the world had caught up with what Alfa Romeo had been doing for the past 20 years which made the company's sedans a little passe as they were then considered to be too conservative. They continued alongside the new Alfetta sedan that represented Alfa Romeo's future in the sports sedan class and by 1976 were quietly discontinued to become a part of Italy's automobile history.

This book covers one of the Italian motor industry's most beloved cars, the Alfa Romeo Giulia Berlinas. Included are road tests, new model intros & performance data. Models covered: Giulia 1300, Super and TI, the Giulia 1600, Super and TI plus the Berlina 1750 & 2000. A total of 136 fully illustrated pages.

MSRP:
Now: $49.95
Was:
By: Brooklands Books . Dodge introduced the Dart range of cars to compete in the low-price market. Although basically the same as the equivalent Plymouth models, marketing changes brought the Dodge...

MSRP:
Now: $49.95
Was:
By: Brooklands Books . After years of producing economical and often uninspiring cars, Plymouth brought out a high performance vehicle. Outwardly looking like a luxury Belvedere, placed next to it...

MSRP:
Now: $59.95
Was:
By: Brooklands Books . The Giulietta established the pattern for future models from Alfa Romeo: its responsive, high-revving, small-capacity engine was allied to nimble road behaviour and sensitive...