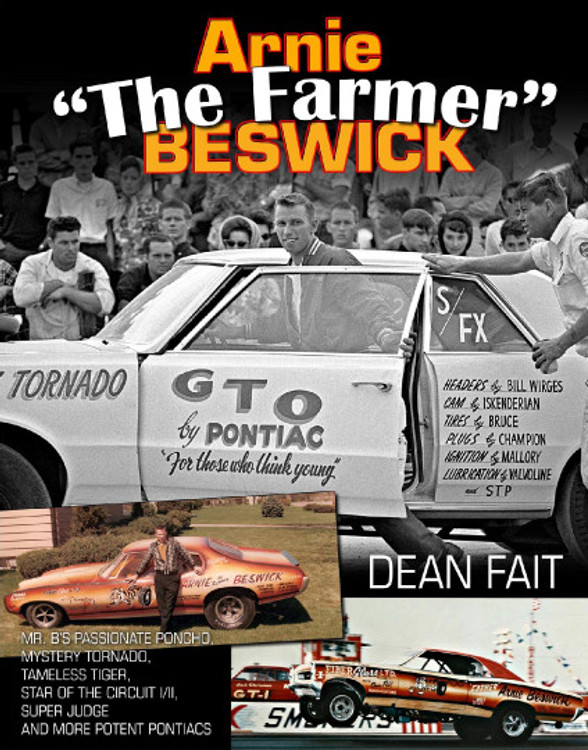 Arnie "The Farmer" Beswick was called "the consummate underdog" by Hot Rod magazine. While there was good reason, there is much more to his unbelievable career.

Born a third-generation farmer in the small town of Morrison, Illinois, Arnie Beswick's driving career began not behind the wheel of a straight-line terror but that of a tractor. On local dusty roads, Arnie's budding reputation grew with street cars, as the "flying farmer" was coined to describe his driving style. When drag racing began in the Midwest in the early 1950s, Arnie was one of the pioneers who campaigned Dodges and Oldsmobiles. In 1960, he purchased his first Pontiac and never looked back.

At the beginning, he didn't like the "farmer" nickname, but he quickly learned to utilize the name to lull his competition into complacency. After all, what could a simple farmer know of the world of high-performance drag racing? Throughout the 1960s, Arnie's Mr. B's Passionate Poncho, Mystery Tornado, Star of the Circuit I and II, Tameless Tiger, and Super Judge all contributed to dispel the myth that a simple farmer couldn't dominate straight-line racing.

Arnie was an innovator, fierce competitor, entertainer and showman who always gave fans their money's worth at the track. He is still brand loyal--sticking with Pontiac long after production models ceased. Arnie has always been a fan favorite for this reason, and he continues to exhilarate fans at the track with his cast of potent Pontiacs.

MSRP:
Now: $99.95
Was:
Signed by the author Gavin Farmer The Porsche Boxster was conceived at a time when the company's fortunes were at a low ebb, but it has gone on to be a huge sales success, doing much to secure the...

MSRP:
Now: $150.00
Was:
By: Peter Garnier . 2nd hand book in excellent / like new condition Almost certainly the most famous automotive artist there has ever been, Crosby did much more than record great cars - he was...

MSRP:
Now: $100.00
Was:
This is a companion book to the Valiant Brochure book.  It embraces all the “other” makes and models associated with Chrysler Australia during the post-war period. Included in this...

MSRP:
Now: $100.00
Was:
Here is another book for all the Chrysler enthusiasts among you.  This time the book contains all of the brochures published by Chrysler for all of its models from the R Series of 1962 all the...

MSRP:
Now: $65.00
Was:
Discover the secrets of Doc Brown s time-traveling DeLorean with the first-ever under-the-bonnet user s manual featuring never-before-seen schematics and cutaways of cinema s most iconic car. One of...