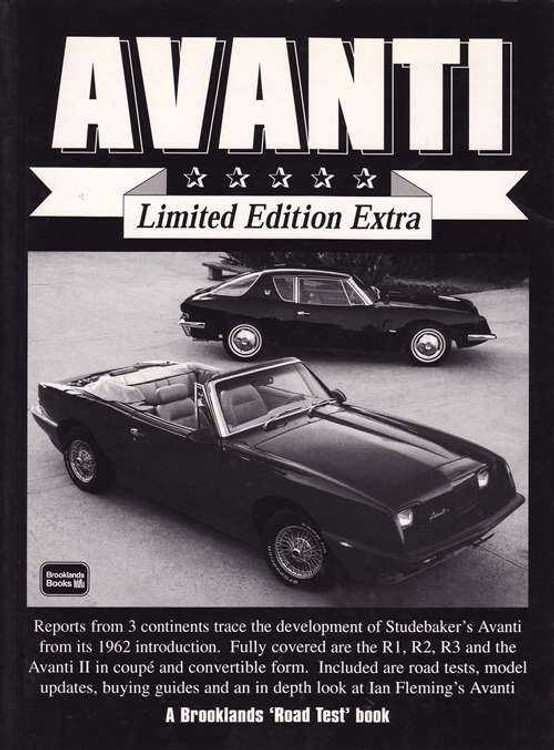 This book traces the development of Studebaker's Avanti from its 1962 introduction. Designed to be a four-seater muscle car and sporty "personal" car it used fibreglass because there was not a single straight line on the body. They used a 289 V8 from 1951 hotted up.  Later the R2 engine was supercharged putting out close to 300bhp. Unfortunately sales did not match expectations and production ceased in 1964. Production was taken up by an erstwhile dealer using a Chevy V8 engine who continued until 1982. The company passed though several other hands until finally ceasing production in 1991.

MSRP:
Now: $49.95
Was:
By: Brooklands Books . The Hesketh V1000 was unveiled in April 1980. The press criticised noisy engines, bad gearboxes and slow performance. Production was halted to rectify the problems and it was...

MSRP:
Now: $49.95
Was:
By: Brooklands Books . Introduced as a 1987 model, it was good looking but offered no serious competition to the European sporting cars. For the first two years sales were disappointing. 1989 saw an...

MSRP:
Now: $49.95
Was:
By: Brooklands Books . This is the story of a rare and desirable Italian car, the Lancia Stratos that dominated the World Rally Championship and rewrote the rules in the 1970s. It is also the story...

MSRP:
Now: $47.50
Was:
The author, Jean Gardner presents an intimate look at nearly 400 aviation landmarks and memorials from over the years ever since man first took to the skies and started meeting with untimely and...

MSRP:
Now: $59.95
Was:
By: Tony Candela . Often, wiring and electrical work intimidates automotive do-it-yourselfers the most. It's not mechanical, and therefore, it's unfamiliar territory. Electrons are invisible,...

MSRP:
Now: $59.99
Was:
By: Dennis W. Parks . Description In the world of automotive do-it-yourself projects it seems there's always been an air of mystery surrounding electrical wiring. "Do I have the right size...

MSRP: $66.95
Now: $39.95
Was:
By: Eric Godfrey, John H Haynes . A Selection of good tools is a basic requirement for anyone who plans to maintain and repair his or her own vehicle. For the home mechanic who has few tools, the...

MSRP:
Now: $59.95
Was:
By: Jeffrey Zurchmeide with Russell Nyberg . Automotive metalwork is a challenge faced by every racer, hot rodder, and customizer. Good metalwork requires skill and specialized tools, and the high...