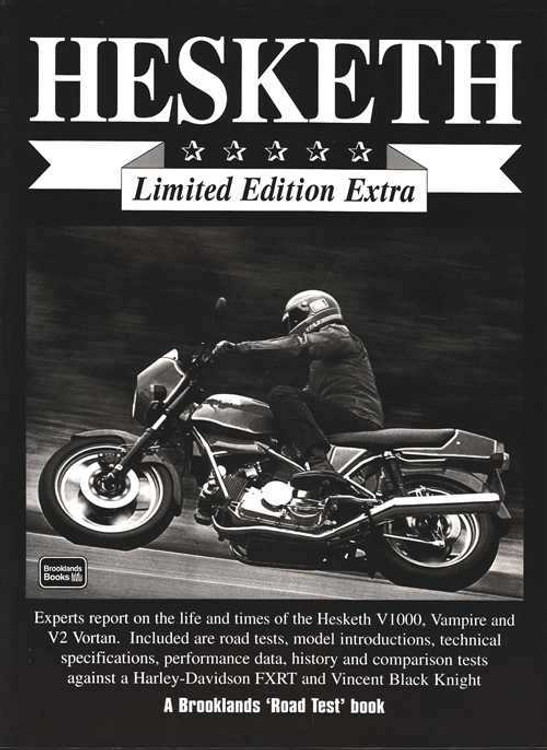 The Hesketh V1000 was unveiled in April 1980. The press criticised noisy engines, bad gearboxes and slow performance. Production was halted to rectify the problems and it was not until February 1982 that the first bike was delivered.

There were still problems with production being hampered by warranty work and so in June 1982 the company collapsed having made little more than 100 machines. In December 1982 Lord Hesketh resumed production privately with the Vampire, which resolved earlier problems but it came too late and the company was dissolved with only 37 bikes built.

MSRP:
Now: $49.95
Was:
By: Brooklands Books . Introduced as a 1987 model, it was good looking but offered no serious competition to the European sporting cars. For the first two years sales were disappointing. 1989 saw an...

MSRP:
Now: $49.95
Was:
By: Brooklands Books . This is the story of a rare and desirable Italian car, the Lancia Stratos that dominated the World Rally Championship and rewrote the rules in the 1970s. It is also the story...

MSRP:
Now: $49.95
Was:
By: Brooklands Books . This book traces the development of Studebaker's Avanti from its 1962 introduction. Designed to be a four-seater muscle car and sporty "personal" car it used fibreglass because...

Henry's Lady - An Illustrated History of the Model A Ford

MSRP:
Now: $189.95
Was:
By: Ray Miller . The Model T Ford had been the butt of more jokes than possibly there were cars. For years, vaudeville comics made them laugh with "I don't need a speedometer, at 35 miles per hour...

MSRP:
Now: $59.99
Was:
By: Herb Martinez . In Herb Martinez's Guide to Pinstriping, Martinez shares the fundamentals, techniques, tips and tricks that have made him one of the world's most accomplished stripers. You'll...

MSRP:
Now: $95.00
Was:
By: James Walker . High-Performance Brake Systems Desing, Selection and Installation - Upgrades for: Muscle Cars, Sports Cars, Tuner Cars & Hot Rods. Brakes might be one of the most important,...

MSRP:
Now: $85.00
Was:
By: Robert Genat, 2nd hand book, very good condition The firebreathing V-8 Hemi powered the most beloved, respected and powerful cars to ever roll out of Detroit. The Hemi engine dominated on the...