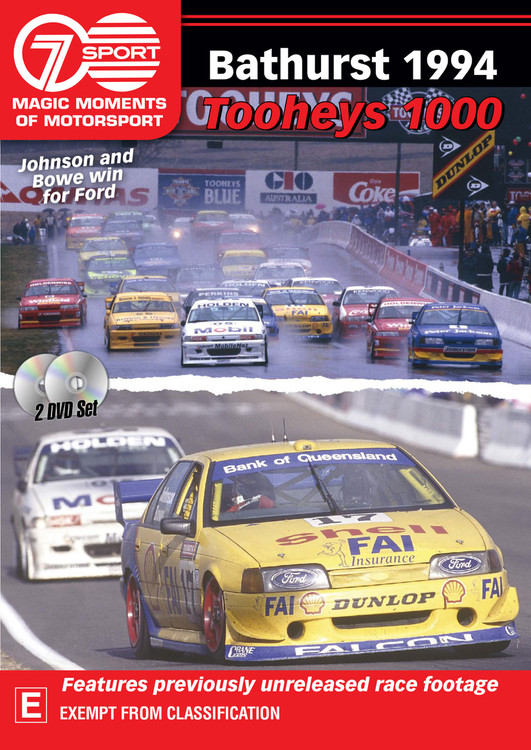 THE 1994 Tooheys 1000 at Mount Panorama, Bathurst remains a special race in the history of ‘The Great Race’ with the full Seven Sport race day telecast released here for the first time as part of the popular Seven Sport’s Magic Moments of Motorsport DVD series.

That year’s race was the 32nd running of the annual October classic and was a classic fight between Holden and Ford, ultimately resolved in the favour of the Shell-FAI Falcon EB of Dick Johnson and John Bowe.

The victory was the second Bathurst win for the duo and Johnson’s third Bathurst 1000 victory, also marking the first ‘Great Race’ win for a Ford since Johnson and Bowe’s win in a Sierra in 1989.

Wet weather made the early part of the 1994 race tricky for drivers and spectators alike as rain lashed the Mountain circuit and made for dangerous conditions until the weather cleared.

This race also saw a young kid named Craig Lowndes instantly make a name for himself, battling with veteran Bowe in the closing laps at the wheel of the second Mobil Holden Racing Team Commodore.

All the big names of the period are featured in this race: Peter Brock (competing for a $100,000 bonus in this particular race), Larry Perkins, Mark Skaife, Jim Richards, Tony Longhurst, Wayne Gardner, Alan Jones, Glenn Seton (who started from pole position) and many more.

Included on this release is the full race day telecast, including the pre-race festivities, highlights of the Tooheys Top 10 Shootout, a Formula Ford support race and then the ‘main course’, the 161-lap Mountain classic.

This release also includes a range of unseen vision too. We have included on this DVD the race action that unfolded while television viewers of the day were busy watching commercials!

This DVD is a must-have for your collection of Seven Sport Magic Moments of Motorsport titles, celebrating a brilliant era of racing at Bathurst.

MSRP:
Now: $39.95
Was:
odzilla dominates at Bathurst THE 1991 Tooheys 1000 at Mount Panorama, Bathurst was run in race record time with victory to Nissan’s Jim Richards and Mark Skaife – now, for the very first time, the...

MSRP:
Now: $80.00
Was:
As we farewell Holden this limited edition box set features all of Holden’s victories at Mount Panorama during the 80s in full, yes the full TV coverage of the event. The Holden Commodore won ‘The...

MSRP:
Now: $39.95
Was:
THE 1993 Tooheys 1000 at Mount Panorama, Bathurst remains a special race in the history of ‘The Great Race’ with the full Seven Sport race day telecast released here for the first time as part of the...