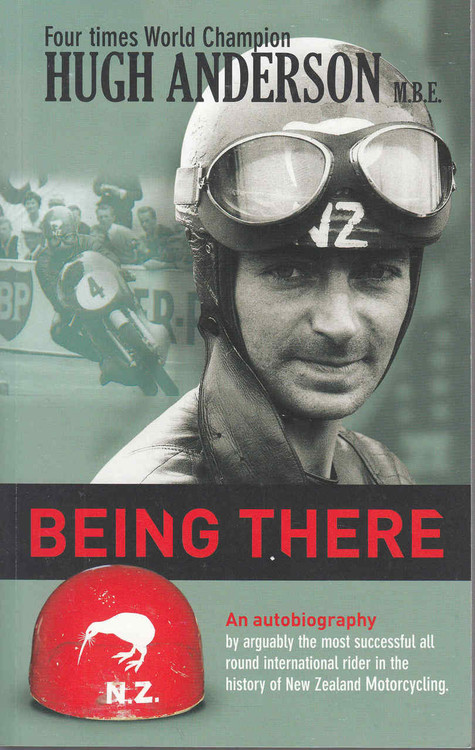 Being There - an autobiography, by arguably the most successful all round international rider in the history of New Zealand Motorcycling.

Motorcycle racers aren't like other sports people. When they enter the arena they are taking their lives in their hands. When they are on the race track, if they are tot there in every sense of the word, they are more likely to be at risk of serious njury or death. Very few champions can explain exactly what it takes to compete a the highest level. What makes them tick, how they cope with the challenge Ind what the science is that makes them so dominate in their chosen sport. Hugh knderson is one who can. From humble origins as a lonely boy on the family farm in New Zealand to the heights of world domination, he explains in his own words he motivation, race strategies, psychology of winning, heartache and triumph hat helped him deliver Suzuki its first major Grand Prix successes in the 1960's.

This was a golden age, when Japanese and European factories battled for supremacy on the world's most dangerous circuits. When rapid development in technology dlowed, for the first time in the history of Grand Prix racing, two stroke engined nachines to compete with and beat the dominant four stroke design. Hugh knderson's career continued for decades after wining four World Championships, with motocross and then classic racing affording him a showcase for the talent that has made him arguably NZ';s most successful racer. The book demystifies the Grand Nix scene that seemed so sanitised on television. It takes us inside the mind of ane of the most resourceful, brave and analytical riders in the history of Grand Prix acing.

MSRP:
Now: $49.95
Was:
By: Chris Walker . Chris Walker is Britain's most popular current motorcycle racer, having captured the hearts and minds of the motorcycling fraternity with a never-say-die attitude, incredible...

MSRP:
Now: $79.95
Was:
By: John Reynolds . John Reynolds first slung his leg over a bike when he was just ten months old. It was a small home-made trike and he started riding this long before he could walk. Little did his...

MSRP:
Now: $59.99
Was:
By: Larry Lawrence . Description AMA and World Superbike Champion and MotoGP star Ben Spies was a racing prodigy who started winning when he was in second grade. Ben traveled an unusual path to...

MSRP:
Now: $69.95
Was:
This completely revised publication was done in late 2000 and inludes a chapter on Fromelles as well. The first ever After The Battle book was initially done by the late Rose EB Coombs and this...