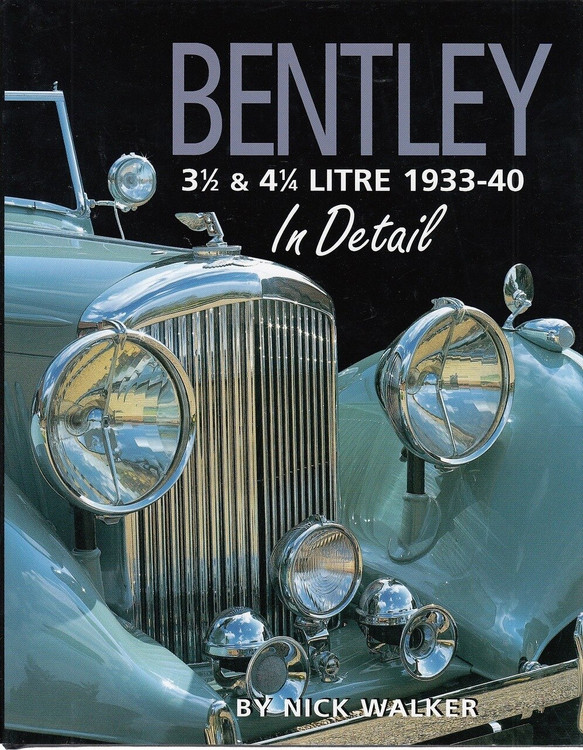 The Bentleys built by Rolls-Royce during the 1930s after their surprise takeover of Bentley Motors early in the decade proved to be an extraordinary success for the company. This success was due to the performance and manners of the cars, to the excellence of their engineering and construction, to the wonderfully attractive coachwork offered, and to the association with the illustrious Rolls-Royce reputation.

The new 3Y Litre Bentley of 1933 fully matched up to the inspired slogan "The Silent Sports Car" that Rolls-Royce gave it, and although considerably more expensive than its competitors it sold better than any of them. It appealed not only to the discerning sporting motorist but also to those who wanted a smart town car that doubled as express weekend transport. It was the right car for all occasions and the right car to be seen in. The Bentley was a favourite of coachbuilders too, and for years during the mid-1930s more firms exhibited coachwork on the Bentley chassis at the London motor show than on any other marque. The greatest accolade came from WO Bentley himself, who pronounced the 3% Litre the best car that had ever borne the Bentley name.

After outlining the story of Bentley Motors and the Rolls-Royce takeover, the author gives a thoroughgoing account of Rolls-Royce's search for a car with which to relaunch Bentley before the earlier glories of the name began to fade. Then he provides a detailed technical analysis of the 31/2 Litre, covering every aspect of the chassis, running gear, engine and transmission. This is followed by equivalent coverage of the succeeding /IX Litre and the short-lived Mark V. Each of these receives comprehensive treatment, with information on differences from previous models, revisions and production changes, the range of bodies available from coachbuilders, performance and behaviour, and appearances in competitive events. The history of the Derby-built Bentley is rounded off with a review of the late experimental versions, the Paulin/Embiricos car and the Corniche.

For owners, present and prospective, there are chapters on using the cars today and on the practicalities of ownership, including advice on parts availability, maintenance and preservation.

In its thorough examination of these most desirable cars, this book provides a rich store of knowledge for the many owners and enthusiasts who care passionately about them.

MSRP:
Now: $125.00
Was:
WO Bentley had launched his first model, the four-cylinder 3 Litre, in 1921, as a sporting car for the discerning driver, intending that it should provide 80mph performance, with exceptional...

MSRP:
Now: $125.00
Was:
Through 80 years these legendary Bentleys, the creation of the celebrated W O Bentley, and not to be confused with the Bentleys produced by Rolls-Royce since its acquisition of the remains of Bentley...

MSRP:
Now: $125.00
Was:
By: Nick Walker, new book, minor shelf-wear, small tear on dust jacket All car enthusiasts know, or think they know, what a vintage Bentley should look like. It should have a Vanden Plas four-seater...

MSRP:
Now: $175.00
Was:
By: Graham Robson ., 1st edition Bentley is one of those charismatic marques that, throughout its long and turbulent history, has produced some of the most famous cars of the time. Founded in 1919...

MSRP:
Now: $199.95
Was:
By: David Venables . Description Bentley is perhaps the most evocative name in British motor racing history and in this authoritative book, illustrated with a breathtaking collection of...