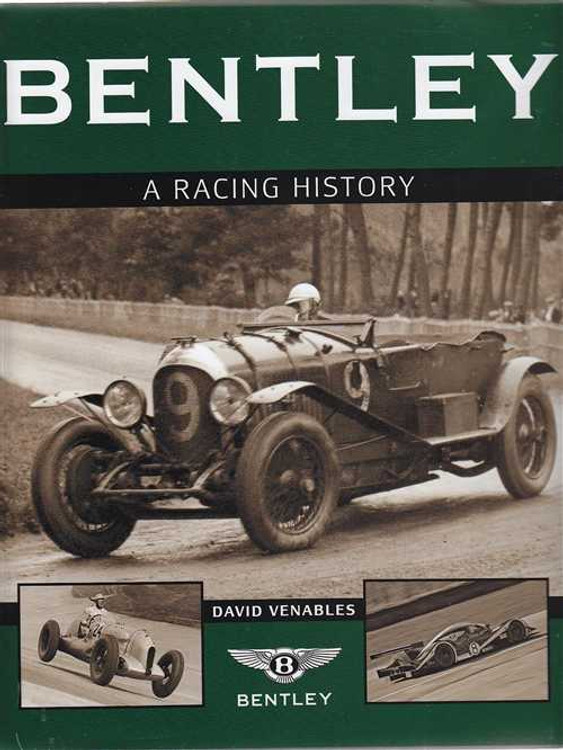 Bentley is perhaps the most evocative name in British motor racing history and in this authoritative book, illustrated with a breathtaking collection of photographs, David Venables tells the entire story of Bentley's racing exploits.

After designing outstanding aero engines in World War I, W.O. Bentley produced the first Bentley car in 1919 and early prototypes raced at Brooklands. Two legends began in parallel in 1923 when a Bentley took part in the first Le Mans 24 Hours but was robbed of victory by a leaking fuel tank. The following year, however, the car returned to Le Mans and this time it did win. Two lean years followed, punctuated by massive financial problems, but thankfully Bentley found a saviour in millionaire Woolf Barnato, who poured money into the company.

Barnato became a key member of the racing team, which achieved its greatest Le Mans win of all in 1927, when a damaged and crippled car was nursed home to a seemingly impossible victory. With the fun-loving Barnato came the 'Bentley Boys', a team of rich drivers who partied as furiously as they raced. Their wild social lives, romances and tragedies are interwoven into the racing story.

The racing successes continued with four consecutive wins at Le Mans and also triumph in long-distance races at Brooklands. Tim Birkin, the most famous of the 'Bentley Boys', became a part of the story with his supercharged 'blower' Bentleys, built despite the opposition of `W.O.' and financed by reclusive heiress Dorothy Paget. It was too good to last and the Great Depression brought Bentley crashing down in 1931. Barnato withdrew his support and Bentley went into liquidation, its assets bought by Rolls-Royce.

It seemed the racing story had ended, but Rolls-Royce produced a new Bentley that was almost as successful in racing in the mid-1930s as the massive green cars of `W.O.' had been. Although the old company had gone, its products still dominated at Brooldands, winning races and breaking lap records.

The story is carried though the privateer exploits of post-war years and culminates with the return of Bentley to international racing in 2001, a renaissance that ended with the glorious triumph at Le Mans in 2003.

David Venables, formerly the Official Solicitor, is Assistant Editor of the Vintage Sports Car Club Bulletin, writes for old car magazines and is the author of eight books, including the acclaimed Brooklands: The Official Centenary History, published by Haynes. He competes in vintage events with a 1930 Aston Martin and a 1936 Fiat, both of which he also drives on the road.

MSRP:
Now: US$139.61
Was:
By: Anthony Pritchard . The DBR9s that battle with the Corvettes and Maseratis on the race circuits of the world today are the latest in a line of competition Aston Martins that stretches back...

MSRP:
Now: US$17.42
Was:
The lesser known naval exploits of the Australian submarine HMAS AE2 supporting the ANZAC Gallipoli campaign are brought to light in this exciting book. Authors, Vecihi and Hatice Basarin tell the...

MSRP:
Now: US$62.80
Was:
By: Brooklands Books . The designers at Crewe started work on the car which would become the Rolls-Royce Silver Spirit as early as 1972, but it would be 1980 before the car and its siblings entered...

MSRP: US$62.80
Now: US$27.89
Was:
By: Terry Lovell . He is the man who created modern-day Formula One. He is both feared and admired for the way in which he masterminded its transformation from an amateur sport of the fifties into a...

MSRP:
Now: US$122.19
Was:
By: Graham Robson ., 1st edition Bentley is one of those charismatic marques that, throughout its long and turbulent history, has produced some of the most famous cars of the time. Founded in 1919...