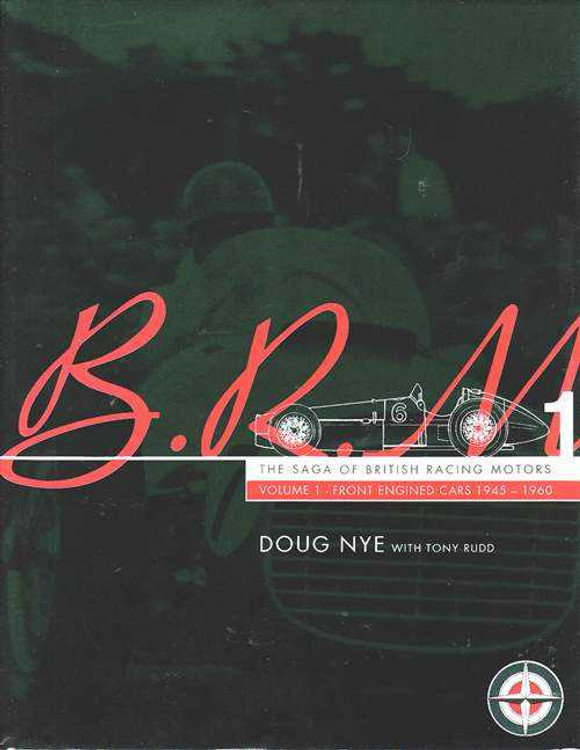 "While I appreciate the view that the car has become a joke in the minds of the Music Hall star and certain members of the Press, it has entailed much development work (and discovery). The world is always hard for pioneers, but even if we fail I am sure history will record that we tried hard to succeed in spite of what some people imagine and would like to say..."

Technology, enthusiasm, vision and faith all typify the British Racing Motors project, which began with their fabulous centrifugally supercharged V16 car immediately after the Second World War and developed into the Grand Prix-winning four-cylinder designs of 1955-1959. No racing team has been the subject of such extremes of passion, and throughout their chequered history BRM cars and people enjoyed the encouragement of the staunchest and most partisan of supporters whilst simultaneously suffering the onslaught of the most entrenched and damning of critics.

To the former, these famous initials stood for a brave enterprise by a group of great men who, inspired by patriotism and driven by a formidable talent, dedicated themselves to guiding Britain to a position of dominance in international motor racing. To the latter, the three letters stood merely for a group of over-publicized incompetents led by a bunch of con- artists...

For 15 years, Doug Nye, whose personal dedication to objectivity in recording motor racing history has earned international respect and acclaim, has devoted much of his time to what even he says is the most exhaustive and exhausting programme of research he has ever undertaken. His self-imposed mission has been to expose the falseness of each of these two extreme viewpoints, and by laying before his readers the facts behind the facade, allow them to make their own judgment of BRM's true position in motor racing history.

He writes:
"Nothing in life is comfortably black or white. Truth and reality are all about shades of grey... In many ways the story of BRM is one of dedication and devotion by some being betrayed by those most likely loudly to claim these qualities as their own... I have tried very hard to demonstrate how motor racing success, and failure, is a technical exercise dependent totally upon the knowledge, quality and endeavour not merely of well-publicized racing drivers and high- profile team principals, but more so upon the inspiration, application and sheer downright perspiration of team engineers, mechanics... and all the other myriad specialists without whom not one racing car would ever make its way to the starting grid."

In undertaking this important historical project, Nye has enjoyed the enthusiastic collaboration of engineer Tony Rudd, who spent many years at the heart of BRM engineering and tactical activities, ultimately as Chief Engineer-cum-Team Manager, and by the Owen brothers, sons of the late Sir Alfred, whose wholehearted commitment to BRM at its most vulnerable prevented the entire project from foundering even before a race had been run. The authors have been given access to Sir Alfred's incredible archive of hitherto classified BRM documentation, extensive extracts from which are reproduced in these pages...thus history 'straight from the horse's mouth'.

This volume — as Doug Nye indicates in his Introduction — was originally planned as the first of a two-part complete history of BRM, but subsequently the project has been expanded into a projected four- volume set. Revealed here is the story of the frontengined cars from 1945 to 1960, whilst Volume 2 is devoted to the spacefrome-chassised cars produced from 1959 to 1965. Volume 3 will continue the story through the monocoque V8 Formula 1 and Tasman cars campaigned from 1964 to 1969, leaving Volume 4 to cover the history of the H 16 and V12-cylinder cars run from 1966 onwards, and the conclusion of the BRM saga.

MSRP:
Now: $295.00
Was:
By: Dick Salmon . This is the story as told by a man who was both a devoted fan and a loyal team member of British Racing Motors. Who saw and was involved in the repeated failures and humiliating...