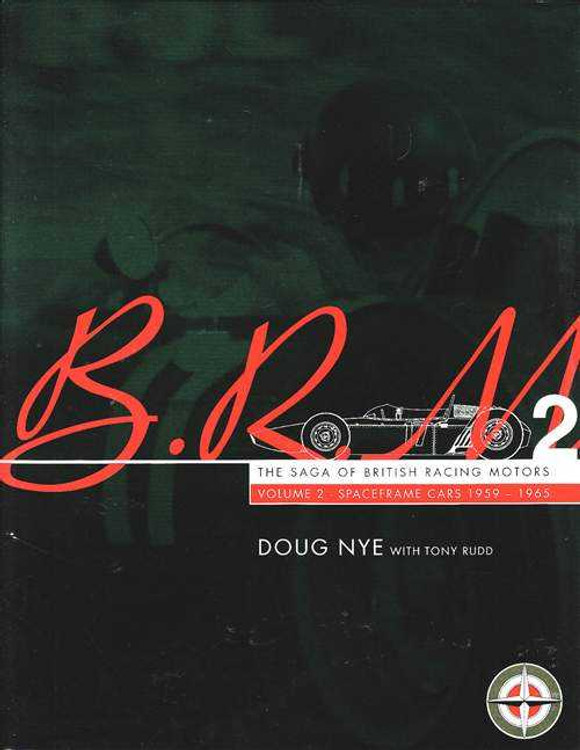 Advanced technology, enthusiasm, vision and faith all typify the British Racing Motors Formula 1 racing project, which began with the concern's fabled centrifugally-supercharged V16-cylinder car immediately after the Second World War and developed into the Grand Prix-winning four-cylinder designs of 1955-1959.

The trials, tribulations, minor triumphs and major disasters of that turbulent period in motor racing history have already been covered in Doug Nye's standard-setting and multiple award-winning first volume of BRM — THE SAGA OF BRITISH RACING MOTORS, published in 1994.

This second volume of what is now a projected four-part complete history of BRM, reveals the story of the spaceframe-chassised cars produced from 1959 to 1965, including the four-wheel-drive experimental test hack of 1964 which in 1968 would become the British Hillclimb Champion car, and the Rover-BRM roadster which evolved into the beautiful Coupe which raced at Le Mans in 1965.

Looking ahead, Volume 3 will cover the wonderfully diverse and successful story of the monocoque V8 Formula 1 and Tasman cars campaigned by BRM and its private customers from 1964 to 1969, leaving Volume 4 to complete the story with the amazing history of the H 16 and V12-cylinder cars — and the V8 CanAm sports cars — run from 1966 until the BRM team's demise as part of the Owen Organisation in 1974 — and the half-life which followed...

1959 to 1965 were the revolutionary years of BRM endeavour and success which saw the Lincolnshire-based team's old hierarchy replaced by new, saw them become the first to follow Cooper Cars' trendsetting lead into rear-engined Formula 1 car design, and saw the creation, development and production of the immortal BRM P56 V8 engine.

With their much-loved number one driver Graham Hill leading the charge, BRM blossomed with their definitive Tony Rudd-designed P578 V8 cars in 1962, Hill fighting a ferocious battle with his great friend and rival Jim Clark of Team Lotus throughout that Formula 1 season until, in the very last race of the year, the South African Grand Prix at East London, victory went to Hill and to BRM. At long last, team owner Sir Alfred Owen's unshakeable faith and perseverance over so many fruitless years in pursuing his motor racing dream had finally paid off — BRM reigned as Champion of the World.

In these 368 pages, historian Doug Nye — unstintingly supported by former BRM Chief Engineer and Team Manager Tony Rudd — tells the story of this era in the very finest of fine-grained detail, with firsthand insight only previously equalled in his rapturously received BRM Volume 1. For more than 20 years, Nye, whose personal dedication to objectivity in recording motor racing history has earned international respect and acclaim, has devoted much of his time to what even he says is the most exhaustive and exhausting programme of research he has ever undertaken. His self-imposed mission has been to present the most detailed and comprehensive history of a Formula 1 racing team that has ever been compiled.

Throughout its long life the BRM team was unique in polarizing opinion amongst enthusiasts and the general public alike. After a decade of widespread vilification through the 1950s, the endeavour grew to full maturity and at last began to enjoy genuine and consistent world-beating success through the early 1960s. It became a consistent front-runner, one of the strongest teams in Grand Prix competition, without a single weak link in its particular chain. Then, having achieved World Champion status, the concern was directed to diversify, to back its newfound sporting stature with strong commercial achievement.

Its V8-engined Formula 1 cars were to be joined by such revolutionary and ground-breaking projects as the four-wheel-drive BRM P67 programme and the endurance racing Rover-BRM P69 gas turbine endeavours. For the first time, BRM Formula 1 cars and engines were also sold into the hands of private owners, who campaigned them for many years beyond the end of their frontline works racing team careers. All of this — and so much more — is recorded within these pages in unprecedented detail, supported by the most painstakingly researched photographic coverage, including many hitherto unpublished images.

In undertaking this important historical project, Nye has enjoyed the enthusiastic collaboration of Tony Rudd, who spent many years of his glittering career at the heart of BRM engineering and tactical affairs, and became the primary architect of their World Championship-winning activities. Nye's work has also been unstintingly supported by the Owen brothers, David, John and Jim — sons of the late Sir Alfred, from whose incredible archive of hitherto classified documentation and correspondence many extracts have been reproduced in these pages.

MSRP:
Now: $295.00
Was:
By: Dick Salmon . This is the story as told by a man who was both a devoted fan and a loyal team member of British Racing Motors. Who saw and was involved in the repeated failures and humiliating...