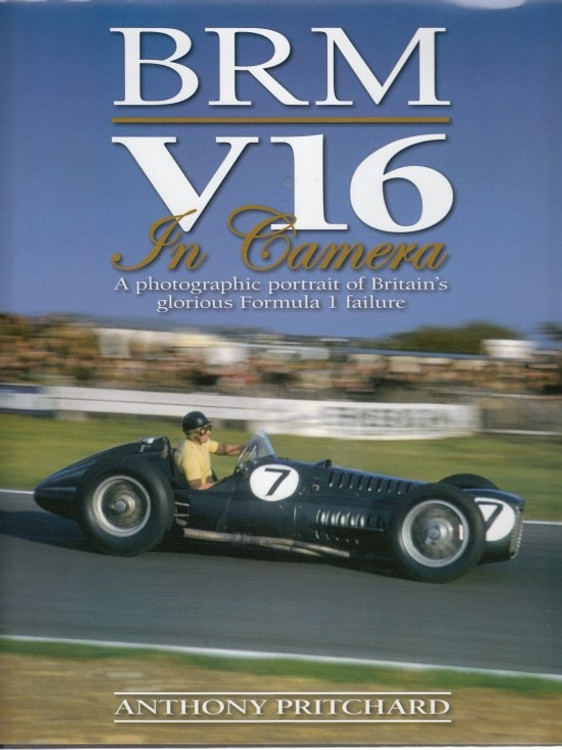 In motor racing history there have been innumerable cars that have failed to live up to their initial hype and the most ignominious of them all must be the ill-fated BRM V16. Conceived in the aftermath of the Second World War as a 'National Grand Prix Car' to take on the world's best, this car was a magnificent folly from start to finish.

Grand Prix racing post-war required eligible cars to be powered by either 1,500cc supercharged or 4,500cc unsupercharged engines and newly created British Racing Motors, funded by contributions from British industry, chose the former route. Led by Raymond Mays and with Peter Berthon heading design, BRM created a highly ambitious car powered by an engine of 16 cylinders in vee formation. The expense and complexity of this incredible engine was to lie at the heart the car's downfall.

The BRM V16's infamy arose above all from its disastrous race debut in August 1950 in the International Trophy at Silverstone, where it arrived at the last minute, lined up at the back of the grid, and expired with a broken driveshaft when the flag fell. As time went by it became clear that the BRM was in no way a potential World Championship winner, and indeed the car only ever took part in one World Championship Formula 1 race, the 1951 British Grand Prix, the two entries finishing fifth and seventh. Instead the BRM V16 found success in club races of short duration — a far cry from what had been intended.

This book presents an outstanding array of over 300 photographs telling the BRM V16's story from start to finish. Coverage includes many close-up technical images, while the main body of the book comprises a race-by-race photographic account accompanied by informative commentary. Painstaking sourcing of photographs has resulted in illustration of every single race, including international forays to Spain, France and New Zealand as well as relatively obscure home events at venues such as lbsley, Turnberry and Snetterton.

Anthony Pritchard, a well-known and highly regarded motorsport historian, is the author of a number of successful Haynes books including race histories of Aston Martin, Lotus, Maserati, Porsche and the Mille Miglia, as well as two volumes of Silver Arrows in Camera covering the periods 1934-39 and 1951-55. He lives in Wooburn Green, Buckinghamshire.

MSRP:
Now: $129.95
Was:
By: LAT, Quentin Spurring . Who ho was the greatest racing driver of them all? The special skills that have been needed to master Grand Prix cars have varied so widely, over the course of more than...

MSRP:
Now: $99.99
Was:
By: Karl Ludvigsen . If a racing car could disappoint an entire nation, that was the dramatic fate of Britain’s BRM. Conceived in 1946 as a world-beating Formula 1 car, the BRM V16 was built...

MSRP:
Now: $89.95
Was:
By: LAT, Mike Doodson . Nigel Mansell first took part in a World Championship Grand Prix in 1980, and didn't win one until five years later. From that moment, however, his career made bigger...

MSRP:
Now: $125.00
Was:
By: LAT, Quentin Spurring . The he outstanding images in this book chronicle the career of one of the most admired Grand Prix drivers in living memory — and surely the most loved in all of Fl...

MSRP:
Now: $99.99
Was:
By: Karl Ludvigsen . If a racing car could disappoint an entire nation, that was the dramatic fate of Britain’s BRM. Conceived in 1946 as a world-beating Formula 1 car, the BRM V16 was built...

MSRP:
Now: $149.95
Was:
By: Brooklands Books (Road Test Portfolio). Description - A-BUGRP This book has been compiled for Bugatti owners, enthusiasts and others interested in the marque. In 1955, soon after leaving the...

MSRP:
Now: $89.95
Was:
By: Barry Lake . Though the Commodore was the basis of all the major models, there were occasional diversions, most notably the Opel coupe-based HDT Monza and the Statesman-based HDT Magnum. The...