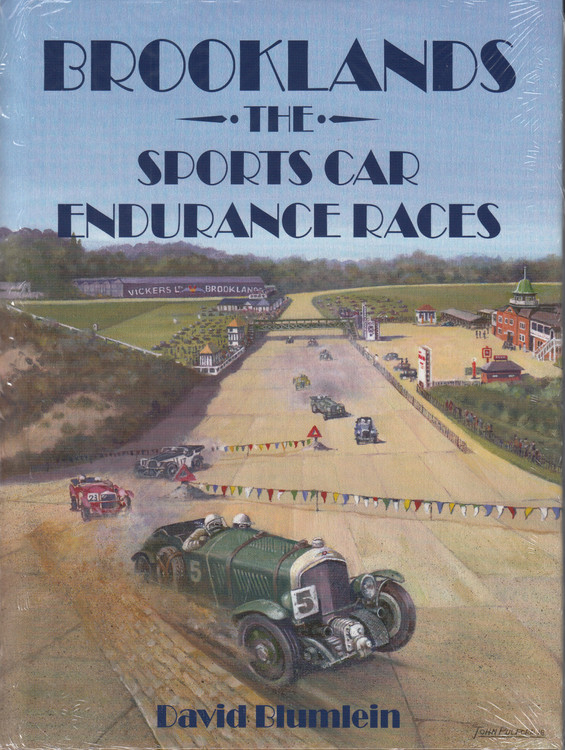 Long-distance motor races were becoming popular in the late Twenties, the Le Mans and Spa 24-hour events being firmly established by this time. It was felt that Britain needed to hold such races but, whereas the Continental countries used their public roads to form circuits, this was not permitted in England the only venue available then was the Brooklands track.

This is the first detailed history of the races which took part on the famous banked circuit which required artificial chicanes to render it more akin to a road circuit.

The text is well illustrated with period photographs, not only of each specific race but also some chosen to convey the atmosphere, character and history of Brooklands.

Detailed diagrams show the variations of circuit layouts used, and there are chapters listing interesting facts that “followed on” from the races and some of the productions cars which subsequently proudly adopted the name “Brooklands” to emphasise their sporting nature.

MSRP:
Now: CAD56.81
Was:
By: Brooklands Books . Description Introduced in 1999, the Noble M10 high-performance sports car was the brainchild of talented design engineer Lee Noble. However it was the iconic M12 which earned...

MSRP:
Now: CAD37.86
Was:
WRITTEN BY THE RACING LEGEND WHO LIVED IT "AN ABSORBING SAGA THAT ROARS AT MORE THAN 150 MILES AN HOUR." —THE INDIANAPOLIS STAR  CARROLL SHELBY WASN'T BORN TO RUN. He was...

MSRP:
Now: CAD90.02
Was:
The immediate post-war period from 1950 to the mid-1960s saw Fiat renew their entire model range, replacing carry-overs of the pre-war models once funds were available and the Italian economy had...

MSRP:
Now: CAD170.57
Was:
Hardcover book, Published in 2020, 160 pages 110 years have passed since Alfa Romeo was founded. A name that has become synonymous with cars, so important has its presence been both industrially and...

MSRP:
Now: CAD33.16
Was:
Ever given a second thought to fuelling up at almost any street corner or buying your spare parts from a myriad of local suppliers? Perhaps you’ve been known to curse the state of our roads and...

MSRP:
Now: CAD142.09
Was:
Author: edited by Luciano Greggio, 216 pages, hardcover, 2020, English text For almost a century, Carrozzeria Bertone has created some of the most sensational models in automotive history. The...