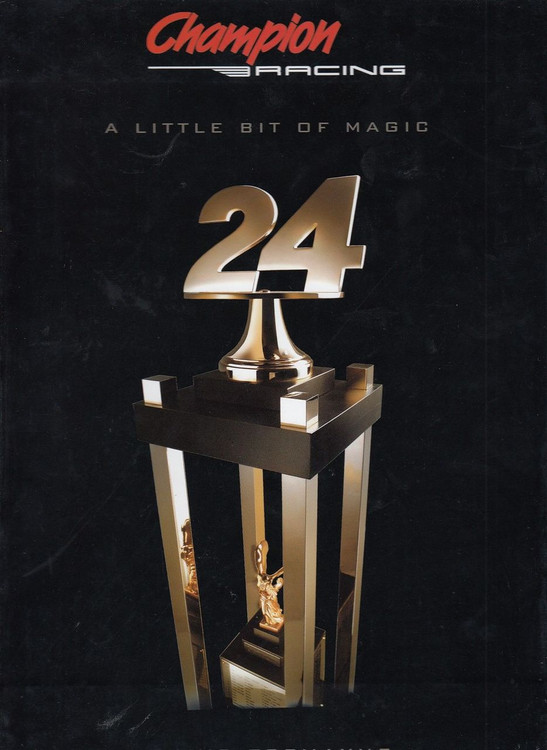 When Florida Porsche dealer Dave Maraj launched his Champion Racing team in 1993, few observers would have guessed it would eventually become a top competitor in the American Le Mans Series, the Speedvision World Challenge, and even the world’s most prestigious endurance event, the 24 Hours of Le Mans. In Champion Racing: A Little Bit of Magic, author David Tremayne tells the full story of the team’s rise, and explains how Maraj’s commitment to hard work, intense preparation, and empowering the right people made all the difference.

Fans of the American Le Mans Series still remember Champion Racing for its striking day-glow livery, never-say-die competitive spirit, and dominating performance at the track. From 2004 to 2008 the team won five ALMS championships, first as a privateer and then as the official Audi factory team in North America. In 2005, Champion made history by winning the 24 Hours of Le Mans in its fifth appearance at the French race. The first-place finish by J. J. Lehto, Tom Kristensen, and Marco Werner marked the first overall victory for an American team at Le Mans since 1967. Outside endurance racing Champion also found success in the Speedvision World Challenge series, winning three straight championships from 2001 to 2003 with drivers Michael Galati and Randy Pobst.

But the real story of Champion Racing is about much more than cars, races, and victories. A Little Bit of Magic goes behind the scenes to show how the team evolved from a small group of enthusiastic amateurs into a highly professional organization capable of winning the world’s most demanding endurance event. Under Maraj’s guidance, Champion worked constantly to improve its performance at the track by focusing on preparation and discipline away from it. The team also excelled at finding the right people and empowering them to meet each new goal— from drivers like Lehto, Werner, Allan McNish, Rinaldo Capello, and Emanuele Pirro to the engineers, mechanics, and support staff who helped them win.

Along with the team’s many successes, A Little Bit of Magic also documents the setbacks that the Champion crew overcame on their way to the top—from the challenge of making a competitive car out of a Porsche-engined Lola prototype to the death of driver Bob Wollek, whose insight and determination continued to inspire the team. It also shows how Maraj’s racing ambitions sometimes conflicted with his status as the world’s largest-selling Porsche dealer, and reveals how a last- minute decision by Audi led to the Champion team’s demise in 2008.

Produced with support from Champion Porsche, A Little Bit of Magic is a fitting tribute to the legacy of a great American racing team. Nearly 500 pages long, the extra-large, fully illustrated book not only tells the Champion story from beginning to end, but also includes forewords by former Volkswagen Group executive Wolfgang Dürheimer and legendary Porsche racing engineer Norbert Singer. There are also personal remembrances and testimonials from drivers Bill Adam, James Weaver, and Lucas Luhr, team owner Roger Penske, and ALMS director Scott Atherton, along with many other friends, teammates, and competitors. Finally, a complete Race Results appendix documents all of the team’s appearances from 1993 through 2008.

With The Little Bit Of Luck! An autobiography of Marcus Chambers

MSRP:
Now: $89.95
Was:
By: Marcus Chambers . **MERCIAN MANUALS 2008 REPRINT** It has been my privilege to know Marcus Chambers for over 50 years. I first met him when I scrambled onto the fringes of the BMC rally team and...