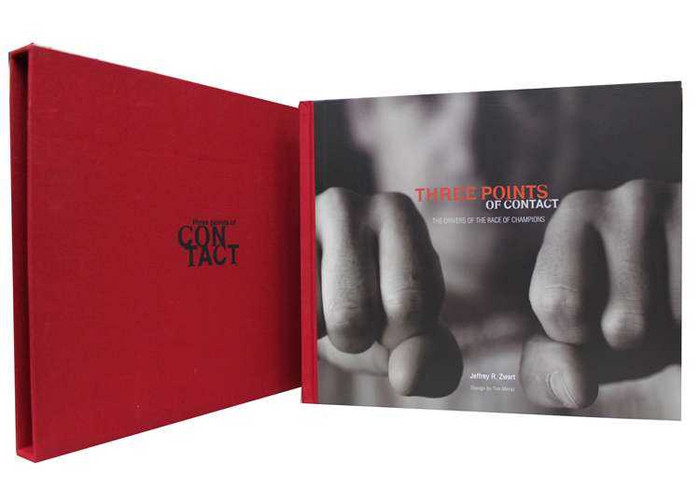 Each copy includes a numbered bookplate signed by the author.

Three Points of Contact is a dramatic series of portraits that reveal how the world’s greatest drivers use their eyes, hands, and feet to control their cars, outpace their rivals, and become champions.

Renowned director and photographer Jeff Zwart (author of the award-winning Porsche Rennsport) created these images at The Race of Champions, held in Paris and London, where top drivers from Formula One, the World Rally Championship, NASCAR, X-Games, and other series compete directly against each other driving identical cars.

Each driver is revealed in amazingly vivid detail, from seven-time Formula One World Champion Michael Schumacher to reigning NASCAR champion Jimmie Johnson. Zwart’s meticulously produced portraits focus on the eyes, hands, and feet—the three points of contact that every driver employs. The book’s large 13-inch by 11-inch format and high-quality printing bring out all of the nuances of Zwart’s close-up, specially de-saturated color photography.

Each of the 24 drivers in Three Points of Contact is profiled in six pages of photographs and commentary. These profiles include a statistical career summary, as well as personal observations on how the three points of contact define each one’s driving and success. A concluding chapter presents The Race of Champions in words and photographs. Other drivers featured in the book include Formula One stars David Coulthard, Jenson Button, and Heikki Kovalainen, eight-time Le Mans winner Tom Kristensen, X-Games and Rally America champion Travis Pastrana and 1995 World Rally Champion Colin McRae.

The book is being published in a limited edition of 1,500 copies and is presented in a handsome cloth-covered slipcase.

The Race of Champions 2006 DVD

The Race of Champions 2004 DVD

The Race of Champions 2007 DVD

Shunt - The Story of James Hunt

MSRP:
Now: $59.95
Was:
By: Tom Rubython . Description James Hunt is remembered more for his girlfriends and wild personal exploits than for his skills in a race car. But the excesses of his glamorous life cannot hide the...

MSRP:
Now: $189.95
Was:
ISBN: 9780857330727, Author: Chas Parker Silverstone traces the full history of the Silverstone circuit, which is rightly regarded as the home of British motor racing. From the first...

MSRP:
Now: $189.95
Was:
By: David Morgan . Description Here is the story of one of British motorsport's best-kept secrets — the Seven Fifty Motor Club. Originally founded 70 years ago, just prior to World War Two,...

Shutter Speed - The Challenge of Photographing the TT