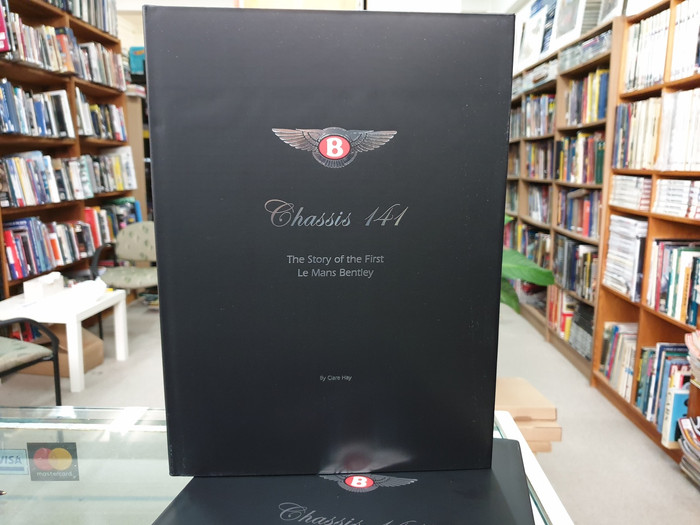 No other motor race epitomises the spirit of the Roaring Twenties more than the Le Mans 24 Hour Race. It tested cars and drivers and captivated the imagination of the public.

The race helped forge the reputation of the Bentley marque which remains today.

This book, "Chassis 141 The Story of the First Le Mans Bentley", was written by Clare Hay and edited by Graeme Cocks to document the story of Duff's car, Chassis 141, and the men who raced the Bentley at Le Mans.

It is a "must read" for anyone with an interest in those halcyon days of motor racing when national heroes were made on dangerous, rock-strewn race tracks in cars which represented the most advance engineering of the time.

A captivating read that traces the story of the mighty car and the remarkable men who created the Le Mans legend of Bentley.

This book tells the intriguing story of one of the first Bentley race cars, its playboy driver John Duff and the pro-driver Frank Clement, the car’s chance re-discovery in a barn almost 70 years later and the restoration which brought it to life once more.

MSRP:
Now: $250.00
Was:
By: Nicholas Foulkes, new book on the shelve since 2006, minimum shelf-wear. see attached images. The Bentley Era tells the lively story of a particularly vibrant time within motorsport, a short...

The History of Le Mans DVD

MSRP:
Now: $95.00
Was:
The complete history of Nascar by Greg Fielden with Bryan Hallman and the Editors of Consumer Guide Automotive, hardcover, published in 2017, 636 pages.

MSRP:
Now: $230.00
Was:
Clare Hay • Bob Watson • Phillip Schudmak • Tony Johns LIMITED TO 600 COPIES Vintage Bentleys were made in limited numbers by the original Bentley company in London between 1921...

Gentlemen, Start Your Engines - The Rest of the Story... (by Wilbur Shaw)

MSRP:
Now: $129.95
Was:
Hard cover, 384 pages including 64 new text pages by Bob Gates and 67 new color and B&W photos. written by Wilbur Shaw with new text by Bob Gates An informal autobiography of an immortal...

MSRP:
Now: $89.00
Was:
(Signed by Paul Beranger)  Crayon to CAD: A History of Post-War Automotive Design in Australia is a unique book about cars and people, places and technologies. In engaging, non technical...

The Book of the Bentley (Kenneth Ullyett)